The Taiwanese ambassador to The Gambia, His Excellency Richard Shih, on Wednesday presented a cheque amounting to $300,000 to the President's Empowerment of Girls Education Project (PEGEP). The money forms part of the Taiwanese government's continued support to the project.

The cheque was received by Mrs. Tenneng Ba Jaiteh Secretary General and Head of Civil Service at her office in State House.

Speaking at the occasion, the Taiwanese diplomat applauded President Jammeh's efforts in the development of the education sector.

Ambassador Shih hailed the project and reaffirmed his office's continued support to the initiative. "We recognise the importance of this project," said Ambassador Shih.

In receiving the cheque, Madam Jaiteh revealed that the project has positively contributed not only the enrolment rate but also retention of girls in schools. She thanked the Taiwanese government through ambassador Shih for the kind gesture. She described Taiwan as true and genuine friend of The Gambia. PEGEP is a brainchild of President Jammeh and aims to provide free education to Gambian girls. 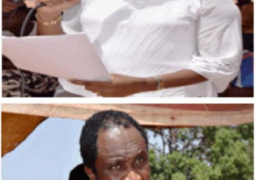