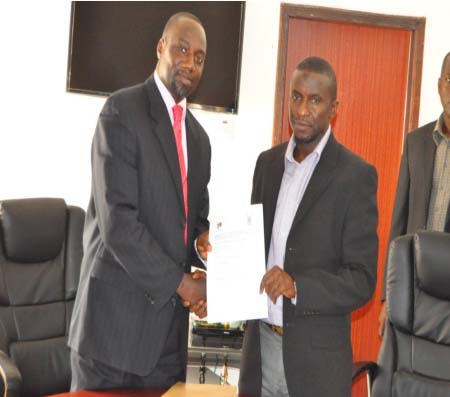 The Gambia Tourism Board on Monday signed a Memorandum of Understanding (MoU) with the Department of Parks and Wildlife Management (DPWM) at a ceremony held at the GTBoard office in Kololi.

The MoU among others seeks to foster collaboration between the two parties on the basis of indicative work programme that would be mutually agreed on an annual basis.

This, according to officials, would be achieved through periodic consultation as per the guidance of the agreed work programme schedule. The annual work programme should be agreed upon by 31st January of each year.

Speaking at the signing ceremony, Benjamin A. Roberts, Director General of GTBoard, said there are quite a number of opportunities in the partnership, calling for collective efforts to bring about some positive changes between GTBoard and DPWM.

While assuring the DPWM of GTBoard’s support at all times, DG Roberts said the move was indeed a good one on their part.

He urged the DPWM and the GTBoard to work together as a team so the rural communities can also benefit when tourists are taken to visit their areas.

“Our two institutions can work to bring revenue and extend parks and wildlife to the rural communities for the people to benefit because whatever activity is taken to this Parks and Wildlife is for the people,’’ he stated.

According to him, when the two institutions are able to manage the partnership, they would start to see the benefits as well as to promote eco-tourism in the communities.

Lamin Kassama, Director of Parks and Wildlife, commended GTBoard and the Ministry of Tourism for the partnership.

“If you look at the statistics of the number of tourists coming to this country, a significant number of them are eco-tourism or nature visitors,” Kassama noted.

Tourism, he added, should be taken to the doorsteps of every community so they will also benefit.

Other speakers at the ceremony were Fatou Beyai Raji, Director of Product Development, Investment and Culture at GTBoard, and Yam Bamba Njie-Keita, Deputy Permanent Secretary, Ministry of Parks and Wildlife.