The extraordinary congress, a constitutional requirement, which among other things should be fulfilled by GSASA Executive Bureau, gave congress delegates the opportunity to listen to activity reports from 2011-2013 and elect their Executive Bureau members.

Speaking at the congress, Yorro Njie, Secretary General the GSASA, said the association was founded on 19 February 2011, under the first leadership of Yahya Al Matarr Jobe, and despite it being a young body has recorded tremendous achievements nationally and internationally.

He stated that the association was recently invited, despite its young age, to participate in Dakar-Goree Open Water Swimming competition held in Senegal.

He added that the trip of the Gambian team was headed by two officials - Yorro Njie and Arfang Jobe, who are International FINA Open Water referees, and did serve as course judges.

He noted that the association has also organised regional competitions in Tanji, Barra, Bakau, SBEC and other places, adding that the security of their swimmers is of paramount importance to them and as a result they do not organise competitions on high seas.

Njie said they intend to work and partner with a number of swimming clubs in Senegal to give Gambian swimmers the exposure they deserve, adding that with time they want to make sure that if they take part in competitions they do not go there only to represent The Gambia but to participate and win vital awards.

SG Njie also said that it is part of their 2014 action plan to maintain the regional championships they have been staging, adding that they also intend to improve it as well as raise funds for it.

The association also intends to organise a FINA technical course for either coaches or officials in 2014, he went on, adding that with the commitment of members they can make it to the 2016 Olympics.

They have been faced with a lot of challenges, he stated further, adding that they also intend to work with regional chairpersons across the country and to also partner with communities.

Pa Alieu Jallow, new president of the GSASA who doubles as boxing president, in his presidential statement said he could see that his role and position in sport is growing every day.

Isatou Nyan, first vice-president of the GSASA, described swimming and aquatic sport as not just a sport but a life-saving sport.

She said they accept to work with the GSASA not because of money but for the passion they have for the sport, noting that they would do their best to take the association to another level and also ensure The Gambia participate in the 2016 Olympics.

Abdoulie Bojang, desk officer of the National Sports Council (NSC), said he was really impressed with the new executive bureau members, saying they are at the moment a success.

He called on bureau members to be careful, saying some people like to take or assume positions but would not do what is expected of them

Ablo, as he is widely known, added that “in anything you are doing if you push hard you are likely to succeed”.

He added that if the bureau members work wholeheartedly with President Pa Alieu Jallow they would reach where they want to.

Bojang also called on associations to put something remarkable into the NSC office to make it have a national character, since it represents the nation.

Habiballah Jeng, assistant technical director of the GSASA, commended members of the bureau for the good work they have done over the years despite the numerous challenges.

He added that they have the natural and human resource but without financial support it would be difficult for them to achieve what they want.

Ebrima Jawneh, finance director of the GSASA, in presenting the financial report of the association, said their participations in international competitions are usually founded by individual members as they as an organisation do not have the financial means to pursue and facilitate them.

Jegan Y. Jobe gave the vote of thanks. 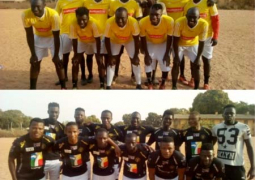