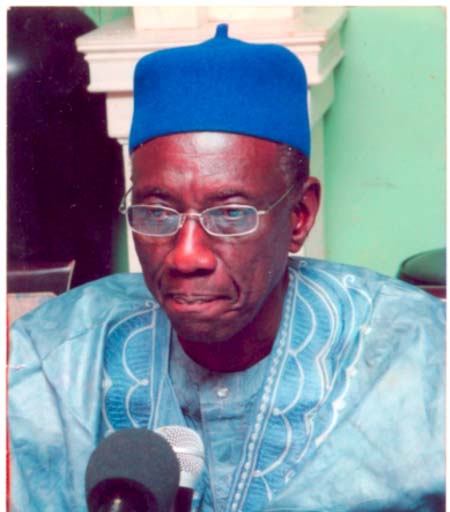 On Tuesday morning around 5a.m. Gambia lost a great historian, a doyen broadcaster who served the Gambia Radio and Television Services (GRTS) Radio for 50 years. Hundreds of people attended the funeral, both at his former house in Banjul and at the mosque.

Many people at his funeral spoke about the life and times of the late Alhagie Mansour Njie. These included Alhagie Alieu Mboge of the Banjul Committee of Muslim Elders, who paid tribute to the late Mansour Njie, whose passing he described as a great loss to the nation because of his vast knowledge of Gambian history and Islamic affairs.

Many people who wanted to know about Sene-Gambian history learned from him, as he had a wealth of knowledge in this area.

As he was laid to rest, hundreds of people attended his funeral,  among  them the Secretary General  and  minister  of Presidential  Affairs, Lamin Nyabally, minister  of Works Bala Garba Jahumpa, Information minister Sheriff  Bojang,  and minister  of the Environment Pa Ousman Jarju.

The ministers, who said they represented the government and the President at the funeral, described him as a hardworking and dedicated man to service to his country and humanity.

Vice President Isatou Njie-Saidy also visited the residence of the late Alhaji Mansour Njie to express condolences on behalf of the government.

In April 2013, The Gambia Now newspaper had an exclusive interview with Alhaji Mansour Njie conducted by Fatou Samba media assistant at the Department of Information Services, who happens to be his granddaughter.

Below we reproduce the full text of that interview.

GN: Sir, can you please introduce yourself to our readers!

GN: Alhagie Mansour: My name is Alhagie Mansour Sulayman Njie, a trader. However, there are many Njie families in Banjul but I come from “Kerr Harra” family. I was born in Banjul in 1935 and at 51 Hagan Street at Half Die in Banjul. I am 78 years old and I am a broadcaster working at The Gambia Radio and Television Services (GRTS). Some people call me a veteran broadcaster, but I prefer to be called a doyen because when it comes to broadcasting in The Gambia, I can proudly say I am the only surviving broadcasting pioneer in this country. I was among the broadcasting pioneers at Radio Gambia from 1962 up to the creation of GRTS in 1994 when Radio Gambia and Film Unit were merged to form GRTS. Even though I’ve now retired statutorily, I am still active in broadcasting, contributing my quota in national development.

GN: Tell us about your educational background!

I attended Banjul Half Die Nursery School and “Dara” (Quranic School). After completing school, I joined the broadcasting field and started working for Radio Gambia. In 1968, I was sent to the BBC in the United Kingdom to pursue a broadcasting course. I also attended many other courses and worked in other countries and was at one time seconded to work in Senegal and travelled widely.

GN: How did you start your broadcasting career?

When I left school, I worked with my elder brother who was trading for the French Company for about six months before joining the Civil Service and was posted to the Electricity Department. I was later transferred to the Information Office as an Accounts Clerk responsible for the distribution of The Gambia News Bulletin, collecting payments, etc. and this gave me the opportunity to meet a lot of people including the late Mr Badou Lowe, an Information Officer and the first Wolof announcer at Radio Gambia. I also met others like late M.D. Njie, late Mr Bam Bah and late Joseph Bahoum. Mr Badou Lowe was both an English and Wolof announcer because he used to step in to read the news in English whenever Captain Peters was busy. By interacting with these people, it was realized that I had the potential to be a good Wolof announcer and I was asked to read, which I did. I ended up working both as an accounts clerk and announcer in 1963. Later, the position of an announcer was created and I was re-designated and moved to Radio Gambia which was then at the Quadrangle in Banjul. I just love broadcasting and it has always been part of my life. Even if I travel I think about it as the job feels like the blood that flows through my veins.

GN: Sir, what motivated you to continue working in the media?

When I started as a broadcaster, there was no motivation in those days as it was new in The Gambia. I only used the microphone for a few hours every week and, whenever I was on air, people hardly recognize my voice and some mistook me for late Badou Lowe or Garba Jahumpa. After sometime, I became famous and as every young man wants fame and though I was not earning a lot of money, the fame motivated me.

GN: After devoting fifty years to broadcasting, are other private radio stations interested in your services?

(Laughs) The other stations are commercial stations and are not involved in what I do at GRTS. They, however, consult me occasionally for certain advice and sometimes ask me to conduct certain interviews for them. Sometimes I am reluctant to do because one man cannot serve different masters – I am already at two places i.e. GRTS radio and TV.

GN: I know you are from a griot family and automatically an oral historian. Can you tell us how you were able to gather all the facts about the Senegambia?

There are three kinds of history, and one has to know at least two – oral and written history. One learns oral history from the ancestors, but they only narrate stories and not dates. However, with the written history, you can always find the dates, time and places. When I started broadcasting, I worked with many knowledgeable griots to produce and present programmes on the history of Senegambia and I learned a lot through those programmes. I also read history books, and blended the two and this gave me an edge over other historians about the history of the Senegambia region. So you can see the difference. As a public speaker, I was involved in a lot of research work in order to get facts to suit the three kinds of listeners – one who knows more than you; one who is at the same level as you; and one who is less knowledgeable than you. So as a public speaker, you have to be careful in how you balance between these three groups. The secret is you have to research by reading and talking to people. I admired griots like late Alh. BambaSusso, Alh. BaiConteh of Brikama and Jebel Samba because I learnt a lot about Senegambia history from them.

GN: Sir, how can the future generation benefit from your knowledge?

This is very interesting, as some people suggested I should write books; but it’s not easy to write, because it entails so many things. For instance, it requires me to get somebody to be working with because I will do the narrating and the person will do the writing, and maybe you, as my granddaughter (Ha haha) can volunteer and we start writing. In that way, I will be able to leave something that younger generations can benefit from. You know when you narrate, most people will just listen without trying to gain knowledge from it – so this is a problem. But honestly, I would really need someone to volunteer.

GN: Sir, is it difficult to be a historian?

O yes, it is very difficult because some people are reluctant to answer questions. I had an advantage because most historians used to come to the radio to produce programmes, and I learnt a lot from them. If I had gone to their houses to ask questions, most of them would not have cooperated. I learnt a lot at the British Museum in the United Kingdom from books with dates written by British. It is also difficult to research in The Gambia because everything is scattered. There was a time when one BakarySidibeh tried to gather materials about The Gambia, but he even had to come to Radio Gambia to listen to tapes.

GN: Can you tell us about some of your biggest achievements?

It’s not easy to consider certain things as an achievement; but for me, having a family who are scattered all over the world and yet taking good care of you is definitely an achievement. I am self-dependent and live happily, because I can take care of myself. I consider my awards for best programme of the year as an achievement, and also when I was decorated with MRG by President Jammeh.

When was your happiest moment?

My happiest moment was when I went to perform the hajj in Mecca in 1978 through a friend in Senegal, as an official guest of the Saudi Government. I was happy when I entered Mecca and saw the “Kaaba” with my naked eyes, and for me this was the happiest moment of my life.

Who are your mentors?

My mentors include Allasan Njie (Allo), a great commentator, knowledgeable, intelligent and liked by everybody; the only negative thing was that he was a short guy (laughs) and late I B A Kelepha-Samba who helped me in my professional development.

How do you feel when young people regard you as their mentor?

Just few days ago, I met a young person at the GRTS Director General’s Office and he came close and whispered ‘I wish I could be just like you when I grow up’. I laughed and asked myself what I have done to deserve this. However, I ended up thanking him. I really feel grateful. I just want to urge everyone to pray for me, for long life with good health; so that I can continue to serve my country to the best of my ability.

This interview was published on Monday 29th April 2013 in The Gambia Now newspaper published by the Department of Information Services. 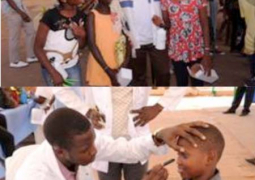