Before, the television programmes have not been quite top quality. But following its satellite launch in May this year, things have turned around very noticeably.

It is observed that programmes and their presentations have picked up a lot in quality.

Presenters have been more carefully selected for the better projection of image, speech clarity and impact. Entertainment and educational programmes have appreciated, and programme errors and disruption virtually non-existent.

All of this should be maintained and nurtured for the benefit of the public, and in the interest of public awareness and information flow.

The change that has impressed virtually everyone, however, is the time change in the news and top educational programmes such as religious presentations, talk and interview shows, and public sensitisation panels. In particular it has been widely appreciated that youngsters and young persons can now get to watch the news at the earlier time of 8pm instead of managing to stay up till 10:00pm for it. In this category of viewers also would fall the very elderly, and also busy executives and businessmen who might need early sleep to catch up with work or business, fresh and early.

What GRTS has achieved here is definitely access to information by a large segment of the population; actually by the entire population for anyone who wants to access information.

Because GRTS is an arm or instrument of Government, it is fitting to direct the commendation also to the government of the day for this successful move. Government is urged further to maintain and to have as one of its cardinal objectives, the access, free flow and dissemination of information to the general public.

There would be fewer, if not a complete elimination of instances of ignorance, rumours, or misunderstanding on matters of public concern.

People will get to know more about their country whether it is political, economic, social, religious, cultural, whatever; and become better equipped to participate in them, not only readily but also effectively. This will enhance development and guarantee individual liberty, democracy and the right to information as similarly guaranteed in the Universal and African Charters to which we have appended our signatures. 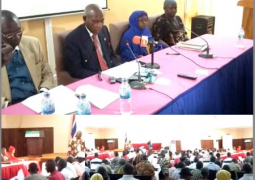