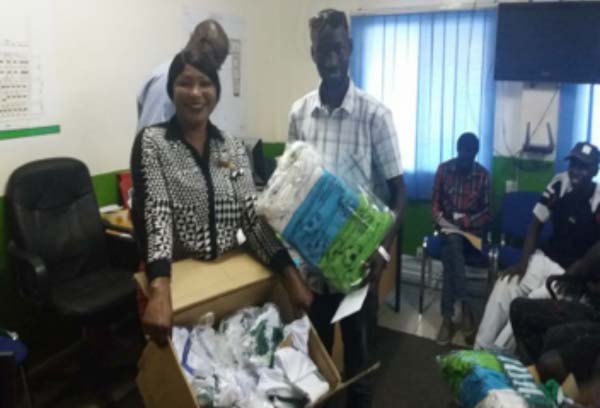 Speaking at the presentation ceremony held their head office on Kairaba Avenue, Modou Jaiteh, Managing Director of Green Vision International Estate Company Limited, said they have given small amount of money in the past, adding that this was why they decided to sponsor the  Gunjur nawetan.

Jaiteh stated that Gunjur produced high prolife players during the 80s and after the 80s they were unable to perform, noting that football cannot develop without finance.

Jaiteh further stated that Green Vision is also glad to patronize the finalists with D1, 500 each for their camping fee and forty T-shirts each for their fans.

He urged Gunjur Sports Committee and the finalists to pray for Green vision in their efforts to develop the company, saying that Green Vision is dealing in Estate developing but also engage in construction.

Adama Touray, Sales Manager of Green Vision International Estate Company Limited, urged the players to keep training, adding that hopefully in future some of them would play for the Gambia.

Darboe revealed that football could not develop without finance, noting that through their partnership with Green Vision Gunjur were able to clinch their first-ever Super nawetan crown.

Mr Darboe further revealed that players such as late Foday Jabang, former Gambian international Buba Star Janneh and other high profile names had played the Super Nawetan but could not clinch the trophy.

He said with their partnership with Green Vision Gunjur, they were able to clinch the West Coast Regional third division league title and also gained automatic promotion to the county’s second tier.

Meanwhile, Green Vision also presented a cheque amounting to D50, 000 to Gunjur Sports Committee for the league winners and runners-up and also gave D5, 000 as preparations fee for the league final.