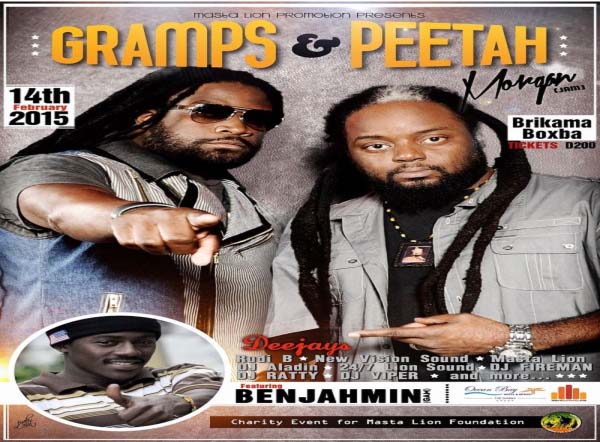 Gramps and Peetah, of the famous Morgan Family Band are expected to be in The Gambia for a charity concert for Masta Lion Foundation on Education in The Gambia on 14 February 2015 at Brikama Box Bar Stadium in the West Coast Region.

The charity concert was organised by Masta Lion Promotion based in Finland and proceeds are meant to support Masta Lion Foundation on Education in The Gambia.

Masta Lion, a Helsinki-based Gambian disc jockey, is said to be the main idea behind the 14th February charity show event. The Masta Lion Foundation is sponsoring over 50 students in The Gambia.

“The foundation is in touch with some schools to get hardworking students in our sponsorship list. I believe that education is the only way that can develop any nation,” he said.

He added that the foundation has an office in Brikama opposite the Red Cross office, and if any parent has difficulties in paying the school fees of their children they can come forward provided that the student is doing well in school.

“We intend to make the charity show annually to enable us to adjust our sponsorship list every year or sponsor students up to university level,” the Brikama-born DJ said.