The particulars of offence stated that Dr Amadou Scattered Janneh, in the month of November 2012, allegedly distributed a T-shirt bearing “President Yahya Jammeh must go” “waato seta” within Senegal and Gambia’s borders and diverse places with intent to usurp the executive powers of the state and thereby committed an offence.

The trial magistrate, Dawda Jallow, granted the application made by the prosecution and issued a bench warrant for the accused person to be arrested through Interpol. 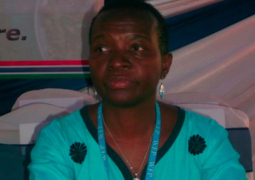