The Gambia Press Union in The US, has sent 500 dollars to the family of missing journalist Chief Ebrima Manneh. The money which came through GPU Gambia branch was presented to the family by the executive members of the GPU headed by its Treasurer Pa Modou Faal at Manneh's family house in Kombo Lamin yesterday. The money was used to purchase four bags of rice, two gallons of vegetable oil, one bag of sugar, one bag of onions and cash amounting to D2500.
In presenting the items on behalf of the Gambia Press Union, Mr. Faal said the money was a contribution from The GPU America branch to assist the family of Chief Manneh.

In receiving the items, journalist Ebrima Manneh's father Mr Sarjo Manneh, said that since his son got missing it was only the GPU the Gambian media fraternity and other outside organisations who came to his assistance, while Mr Manneh also appealed to the religious leaders to assist in his son's release.
I'm appealing to anyone in whose custody my son is to please release him for the sake of God, Ebrima is young with neither a child nor wife but with big family responsibilities. He has been helping the family a lot".

Mr Manneh finally thanked GPU USA and all those who have sympathised with them about the whereabouts of his son.
Meanwhile the family will continue receiving D2500 from GPU (gambia) for the next two months. 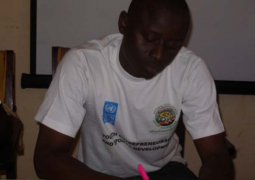