Today – December 16, 2015 – marks eleven years since Deyda Hydara, editor and co-founder of The Point newspaper, was assassinated. The veteran journalist was gunned down by unidentified persons in a drive-by shooting in 2004.

The tragedy happened in New Jeshwang, on Thursday, between the hours of 10:00pm and 11:00pm. This coincided with the 13th year anniversary of establishment of The Point. Deyda Hydara was laid to rest on Friday, December 17. No one has since been brought to book for his murder.

Every year, the Gambia Press Union (GPU) organises a symposium in honour of the late Deyda. For, he was not only the president of GPU, but he had also played a crucial role in transforming the Union into the vibrant institution it is today.

Thus, the annual commemoration is aimed at:

Renewing calls for the Government of The Gambia to investigate and bring to book the killers of Deyda; that justice for Deyda’s murder is long overdue.

Highlighting and celebrating the legacy of the late Deyda, who had more to his influence than the might of his pen. He was a father, a friend, a humanitarian and a journalist.

Advocating for the promotion of inclusive and sustainable development; democracy and press freedom - ideals for which Deyda unequivocally expressed his willingness to stake his neck in their defence.

This year, besides the traditional seminar which will look at the role of media in a democracy, the GPU will launch the first-ever annual Deyda Hydara Memorial Lecture Series on Sunday 20 December 2015. The theme for this maiden edition is: The Gambia at 50: The role of the media in the independence struggle.

The theme is timely and relevant, given that The Gambia this year marked 50 years of independence and the government did celebrate in grand style the Golden Jubilee.

The topic will be delivered by a renowned historian, Ensa Touray, of the University of The Gambia. The event is expected to bring together the Hydara Family, journalists and journalism students, history specialists and students, civil society and government representatives, diplomatic and development community, as well as individuals interested in the freedom and development of Gambia media, press freedom and democracy. 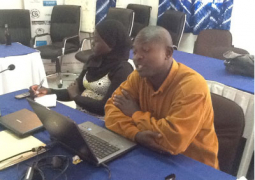