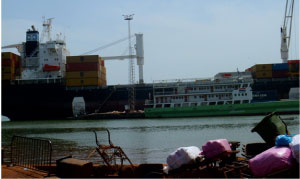 The Gambia Ports Authority (GPA) in collaboration with the Ferries and the Joint Operation committee (JOC) tax force committee will this week held a simulation exercise at the Banjul Terminal.

The committee comprising of members of various institutions, is mandated to ensure the safety and security of lives and goods on board the ferries and canoes crossing the Barra Banjul crossing point.

Speaking to this reporter on Monday, Amie Secka-Njie, Assistance Safety Manager GPA who also doubles as the acting chairperson of the organizing committee, revealed that the purpose of the simulation exercise is to test the emergency preparedness of key stakeholders and to make amendments where necessary.

“It is not the first time and there should be no panic, it is just to test the emergency preparedness of the GPA, ferries and of all the stakeholders,” she said.

She stated that various departments such as the National Intelligence Agency, National Environment Agency, Gambia Barra Canoes Association, National Disaster Management Agency are working together all geared towards ensuring safety and security.

“This is not only GPA, it is everybody,” the GPA Assistance Safety Manager added.

Describing the exercise as a nationwide event, Amie noted that as at now “we are at Banjul terminal and we hope to operate in other crossing points across the country.”

While underscoring the importance of the exercise, Amie further stated that it is very essential to know how to deal with emergency.