In his opening speech, Hon. Njogu Bah, the Minister of Works, Construction and Infrastructure, who spoke on behalf of The Gambia government, thanked the organisers for choosing the country to host the high-profile three-day event, at the Kairaba Beach Hotel.

Minister Bah went on to say that the meeting is important in many ways, not least the fact that heads of Port Authorities from West and Central Africa are gathered in Banjul to exchange ideas, geared towards enhancing the port operations of member countries of the association.

He said West and Central Africa combined together constitute a very high segment of Africa’s consumer population and market.

"As ports managers, we entrust you to continually devise new policies and strategies that would ensure the objectives of cost, timeliness and reliability of port services are realized."

He added that ports everywhere have a very crucial role to play in economic and social transformation. "It is truly gratifying that heads of close to or more than 30 authorities have decided to come together in such an organised manner, to brainstorm and come up with appropriate strategies that would make ports operations in the two regions efficient and effective."

According to Mr. Gibba, the meeting will play a very important role in the implementation of programmes for ports in West and Central Africa.

He finally thanked the Gambian leader for giving them the support for the successful hosting of the meeting.

Deputising for the Secretary-General of the Maritime Organisation of West and Central Africa (MOWCA) was Nestor Galley, who is the Managing Director of Ghana Ports and Harbours. He thanked the government and people of The Gambia for their continuous support to his organisation.

Mr. Galley saluted the achievements of PMAWCA member states and pledged his organisation’s support to the PMAWCA.

He urged for greater collaboration among PMAWCA member states. 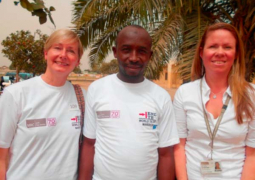