Mr. President it was disheartening to hear that three journalists working in different media outlets were allegedly insulted and assaulted on Thursday by some members of Barrow Youth Movement and Barrow Fans Club at the Janjabureh Ferry Crossing Point while they were doing their job.

This is unacceptable; gone are the days when journalists in The Gambia were maltreated or insulted in the due execution of their duty. Gone are days when a president would order his hit squad to arrest, torture and even kill journalists or burn media houses.

Mr. President, records have shown that with regards to press freedom, Gambia is ranked 9th in Africa, out of 55 countries and 92nd in the World out of 186 countries. This record should be safeguarded and be improved upon. The achievement is much better results compared with the previous records of being amongst the last 3 in Africa during Jammeh’s regime.

Mr. President, the press plays a very vital role in our society as they educate and inform the populace about things happening in and around the country.

The Gambia Press Union has condemned such kinds of act and should not be repeated again.

Mr. President, the culprits should be arrested and face full force of the law as they have destroyed the camera and mobile phone of two journalists. The journalists should also be compensated because they were duly accredited by state house and were doing service to the nation.

We will still remind you of your promise to work with the press in a smooth manner and to allow journalists to work in The Gambia without hindrance or fear when you assumed office in 2017.

The Barrow Youth Movement and Barrow Fans Club should also be warned not to repeat such act again as your image will be tarnished. The state security agents should be responsible for your security and not them.

The journalists on tour with you should be protected and all necessary arrangements to be made to facilitate their work.

All who claimed to be members of the Barrow Youth Movement and fans club on tour should exercise patience and behave as expected.

Mr. President don’t forget to keep your promise to abolish the draconian media laws before the end of the year so that your government can work with the press in peace and harmony as we are all partners in development and not enemies. Your office should apologise to these three journalists who were maltreated and insulted and their media houses soonest.

Finally Mr. President, December 2nd will be next week, the proposed date for the 3 Years Jotna planned protest asking you to step down as agreed in the Coalition MoU. The state security agents should be alert and act tactfully to avoid confrontation with demonstrators.

Three Years Jotna (time is up) can be allowed to demonstrate peacefully escorted by the state security agents to avoid violence because among their midst can be bad people to bring trouble and take advantage to vandalise properties and loot goods.

Markets, banks, supermarkets, government institutions, schools and financial institutions should be jealously guarded to avoid unscrupulous individuals from taking advantage of the situation.

The 3 Years Jotna demonstrators should also know that The Gambia is our homeland and we shouldn’t allow politics to divide us.

Instability will affect everyone, especially the business sector. It is not in anybody’s interest to bring instability into the country just because of politics. We should continue to pray for peace, dialogue and stability in all mosques and churches so that peace will reign in our country. Trouble will take us nowhere.

For The Gambia Our Homeland. 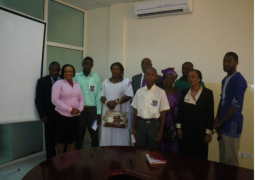