The much talked about elections of the Gambia National Olympic Committee has been called off owing to a last minute change of the constitution.

Associations went to the polls yesterday at the GNOC Olympic Hall in a bid to elect a president to replace the GNOC's convicted president Lang Tombong Tamba, who was sentenced by the high court of The Gambia last July, but it later appeared that there was some new change in the constitutional provision of the GNOC.

"I am totally surprised to see a change in the constitution during the elections," said Musa Koteh, who headed a massive campaign in support of one of the candidates, Abdoulie Baks Touray.

He pointed out that it was interesting to learn that Adama Njie, an Olympia, who attended three Olympic games, was denied her voting right having voted during the last GNOC congress.

"The Gambia National Olympic Committee took their own list to the Independent Electoral Commission when they are not supposed to be responsible for that," Musa Koteh, who was involved in a tempestuous campaign with Touray's opponent Momodou Dibba, lamented.

"They cannot be a player and the same time want to serve as a referee; but they are doing this because they have something special about this election," he added.

Koteh gave a brief explanation regarding the controversy that surrounded the election, saying the GNOC had violated the constitution by coming up with a different list of nominees which was totally different from their previous list that contained 15 Olympic sports and 10 non-Olympic sports.

"They made further increment of 16 Olympic sports and 10 non-Olympic sports, which was revealed when they announced the names of the qualified voters and the inclusion of Judo in the constitution," Koteh said, adding: "This is a clear indication to the fact that they have completely violated the constitution."

Judo, according to Koteh, should not have been given the voting rights at the expense of an Olympia Adama Njie, who had on sporadic occasions represented the country in the Olympic Games.

"This," he went on, "led to the controversy that we have witnessed in the elections."

The acting president of the much talked about GNOC presidential seat, Beatrice Allen, however, has a different opinion.

"Judo is a registered association which is also recognised in the Judo championship," she told a crowd of reporters, adding that she has seen no reason why Judo should not be given a voting right.

Beatrice, also an IOC member, continued to defend Judo, saying the association was well established before Karate and "therefore its inclusion should not be a stumbling block".

She added that Abdoulie Touray should not refute that Judo and Karate "are part of the election".

Beatrice told the media: "I cannot tell when the next election will take place until I consult the IOC who are likely to conduct the election."

It is rather unfortunate and embarrassing to witness such a controversial congress due to some late changes in the constitution.

The news has come as a shocking blow to the Gambian sports fraternity, who are looking forward to seeing a positive change at the GNOC.

Controversies at the polling site continued when a good number of sports journalists were denied entry at the main entrance of the GNOC gate despite having been accredited.

The embarrassing situation led to a push and pull between the security personnel and journalists under the watchful eyes of Lamin King Colley, who played a little part in resolving the fracas. 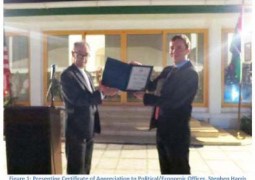