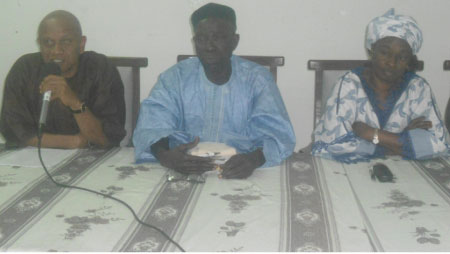 The Gambia National Olympic Committee (GNOC) at the weekend convened a press conference at the GNOC’s office in Bakau to disclose the numerous achievements registered by the new administration from the beginning of its tenure in office to date.

The current GNOC management under the leadership of Alhaji Momodou Dibba took office on 12 February 2011 in the midst of a heated controversy that has completely torn the GNOC apart.

Dibba and his fierce election rival Abdoulie Baks Touray, together with their supporters, were hugely involved in a turbulent battle towards the election, a scenario that led to the abortion of the initially scheduled election in controversial circumstances last December.

Following a highly publicised cancellation of the first election date, the rescheduled election date (12 February 2011) was also put in jeopardy by Touray and the boycott of his supporters after they accused the IEC of unfair conduction of the electoral process.

Touray and his followers also cited constitutional irregularities as the main reason for their boycott but despite that the Independent Electoral Commission went ahead with the election procedure, which confirmed the election of Momodou Dibba as the new president of the GNOC on 12 February 2011.

Since their election to office, according to many observers, Dibba and his executive bureau have registered significant achievements over the months, which included the transformation of the GNOC into becoming a key contributor in creating equal opportunities for all sporting associations to get access to its resources.

However, some of the achievements of the new management were the conduction of a series of high-profile administration and management courses for a good number of the sporting associations including journalists, and the first-ever GNOC Women and Sports Festival of recent.

Speaking to the media at the press conference, the GNOC boss lashed praises on the tremendous work done by journalists in disseminating information to the general public through the media.

“I must first of all commend the journalists for the great coverage they have provided for the GNOC since my election into office to date,” said the GNOC president.

Dibba, whose marathon speech touched on a wide range of GNOC’s achievements and the key activities it intends to roll out  from now on, added that one of the success stories registered under his management is a record attendance of over one thousand people to the 13th edition of Sports Banquet and Awards ceremony held eight months ago.

According to him, the contribution of the Japanese people, notably the Grant-Youth Development, was indeed a great addition to the GNOC’s success, as well as the 30th Extraordinary General Assembly and the 38th Anniversary of ANOCA in Lome, Togo, in which the GNOC was represented.