The opposition Gambia Moral Congress has rejected what it called a bogus and fraudulent preliminary report of the Commonwealth expert team to the just-concluded presidential election in The Gambia.

In a statement issued by the party yesterday and signed by its leader Mai Ahmad Fatty, the GMC said the chair of the Commonwealth expert team, Professor Bojali Akinyemi, has conclusively discredited himself as an impartial observer and seriously stained the image and integrity of the Commonwealth.

The conclusion of the Report, the statement said, is not credible because it ignored the challenges concerning the process itself as contained in the Commonwealth pre-election Report.

All Gambians saw the Head of the Commonwealth Election Observer Mission at State House, his comportment, demeanour and use of language. It was very theatrical. It is curious that a man who jetted into the country on the 18th November 2011, and five days later, could place himself in the position of an indisputable expert on Gambian politics, speaking with authority on the governance situation in our country.

Any mentally sane person would conclude that it is practically impossible to comprehensively evaluate The Gambian electoral process and give it a pass after a brief visit of just few days stay in the country, without even talking to major stakeholders. That was precisely what Mr. Bola Akinyemi did.

He, for instance, did not meet with or speak to any Executive Member of GMC, and I understand that we are not the only political party unique in this regard. Instead, in compiling his Report, he was busy consulting members of the APRC. No wonder, Gambians do not take him seriously. His manner of theatrical performance on national television revealed tonnes of evidence.

Mr. Bola Akiyemi has conclusively discredited himself as an impartial observer and seriously stained the image and integrity of the Commonwealth. His assertions are baseless, his premises fatally flawed and his conclusions were exceedingly erroneous. His unusually demonstrable enthusiasm in trying to placate and endear himself to Gambian authorities on national television in my view is very despicable.

The conclusion of the Report is not credible because it ignored the challenges concerning the process itself as contained in the Commonwealth pre-election Report in the possession of Mr. Akeyemi; it is as bogus and fraudulent as the results of the very elections he validated, and we reject it outright.

As genuine Gambian electorate bid him good riddance, we join our citizens in expressing our abhorrence of his illogical assumptions and presumptuous flair of expertise or knowledge when in reality he has no clue as to the situation and circumstances in which he was attempting to swim.

The Gambian people know the truth, so do the authorities he was strenuously trying to please and appease. No wonder, many African countries are plunged into post-election political crises with this type of pseudo-analysts parading around and about.

No genuine Observer will ignore the impact of governance on the process, and the fact that people like me are vulnerable to all forms of legal plots with a view to get us wrongly convicted by hook or crook on account of our political inclinations, or the drastic conditions the press had to endure, etc.

How can you validate the results of a fatally flawed process as accurate by ignoring the process itself that determines the results? We shall take this issue at the highest level of the Commonwealth so that they immediately and thoroughly investigate into what might have transpired during his five days stay in The Gambia.

Note: The Commonwealth Report was published in our Monday issue. 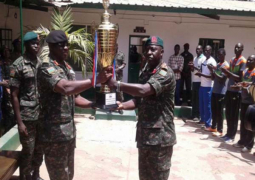