The Gambia Moral Congress (GMC) political party has expressed its disappointment with the Inspector General of Police for denying them a permit to hold a political rally.

A letter from the police to the GMC, dated 22nd March 2011, responding to the political party’s ‘Request for Permit to hold Rally’, stated that the “request to hold a political rally could not be granted this time around, because of security reason”.

“The Leadership of GMC strongly condemns the tacit refusal of the Inspector General of Police to approve a request for a permit to hold a political rally”, declared the GMC in a press release signed by the party leader, Mai Ahmad Fatty, and sent to The Point newspaper, also dated 22nd March 2011.

In the release, the GMC said they have wrote a letter to the IGP for them to be issued a permit to enable the party hold a political rally on Wednesday 23rd March 2011 in Sanchaba village in the Kombo north district of the West Coast Region, but were denied a permit.

“The constructive denial of a permit to hold a political rally is a fundamental violation of the constitution. GMC will not entertain a subsequent denial of its constitutional rights under any colour of pretence whatsoever”, the release said.

It added: “The party cherishes the peace and stability in the country, and emphasizes that the conduct of the police promotes breach of the law”.

The Public Order Act of the requires political parties to apply for a permit from the police in order to use public address systems – loudspeakers – in their rallies.
Meanwhile, when contacted on Tuesday Police PRO Mballow said: “I am not aware, but when I get to the office tomorrow I will follow the matter,” he said.

When this paper called him yesterday again, he said, “please call me back”, and afterwards he could not be reached.

However, before going to the press, GMC Youth League provided us with a copy of the reply to their letter seeking for a permit from the Office of the IGP.

The letter from the police was addressed to the National Youth Mobiliser of the GMC and was captioned “Re: Request for Permit to Hold Rally”.

The letter read: “With reference to your letter relative to the above-mentioned subject matter, I regret to inform you that your request to hold a political rally could not be granted this time around because of security reason. The Inspector General of Police regrets any inconvenience caused”. 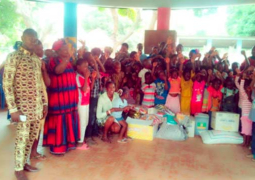