Global FC came from one nil down to hammer Young Boys FC 5-1 in the ongoing Lamin King Colley’s junior football tournament played at Comium Park Opposite Gunjur Car Park at 5pm on Sunday.

The latter needed a win to boost their hopes of reaching the quarterfinal after losing to Gunjur Project FC 3-2 in the opening game a fortnight ago.

Young Boys opened the score through striker Ebou Kujabi in the 4th minute of the game to give the Gunjur-Jujuba outfit the lead.

Salieu Nyandou could have leveled the score for Global FC mid-way into the first half from penalty spot but was denied by the Young Boys net-minder.

Salieu Nyandou, alias Zala, leveled matters a few minutes before half time to make it 1-1.

Salieu Nyang netted the second goal for Global FC a few minutes after the interval to complete his brace before Buba Touray scored the third goal to dash to dash Young Boys hopes of coming back.

Sunderland FC beat Halifax FC 3-2 in the early kick off on the same day.

Mamadou Jatta netted a brace for Sunderland FC in the game.

Foday Daffeh was on target for Kaku United in the game. 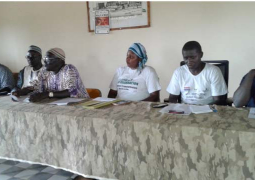