Glamorous Model of The Gambia (GMG) led by the proprietor of Vision Promotions, Williams Brown, on 21 October 2010 paid a courtesy call on the beverage manufacturing company, Banjul Breweries.

Speaking on the occasion, Williams Brown said: “Vision Promotions is behind Glamorous model of The Gambia, which includes natives from Basse, Brikama, Farrafenni and the greater area.

He added that they recently conducted a show and audition in Basse in which 30 models including boys and girls were qualified for the final set to take part  in  a model show on 5 November 2010 at the Friendship Hotel at the Independence Stadium in Bakau.

Franck Boeuf, country sales and marketing manager of Banjul Breweries Limited, said: “Banjul Breweries is in support of GMG. Young people need to become together to establish something for themselves.”

Mr Boeuf said Banjul Breweries is always ready to give back to the society and the country as part of the company’s corporate social responsibility. He thanked Williams Brown for making the trip to Basse a success.

“We should not focus on only the greater area; rather we should reach other parts of the country,” Mr Boeuf said, adding that young people can do a lot if given the support.

“The is an advanced country in and with a future; therefore there is a need to invest,” Boeuf noted.

He advised the models to put up excellent performance at the upcoming event in November.

Rahim Sesay, a model, said their visit to breweries was promoted by the Youki brand.

He stated that two weeks ago they went to Basse to meet with other models. “We see it necessary to meet those with passion and potentials to be modelists,” he stated.

For her part, Fatou Sinyan Mbregan, financial controller of Banjul Breweries, challenged Glamourous to make their choice wisely, and with honesty and faithfulness. She further advised them to work hard, adding that young people have a lot of challenges ahead of them.

“As young people, you cannot work in isolation but to work as partners,” she noted.

The models earlier visited Joao Ferreira, the technical department manager, and Idrissa Susso, lab technician at Banjul Breweries as part of their call on the company. 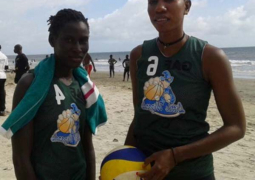