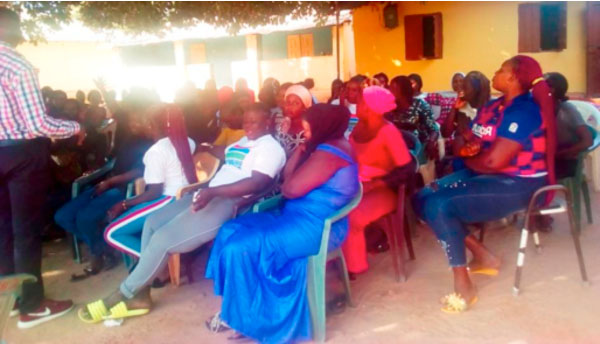 The sensitisation is conducted under the project titled: Ending the practice of FGM/C through the engagement of children, youth, women and men in The Gambia. The project targets to engage girls, girls clubs and out of school girls in West Coast Region.

The UNICEF funded activity aimed at enlightening out of school girls on the effects of harmful traditional practices.

Haruna Badjie, West Coast Region Social Welfare Officer said the 1989 Convention on the Rights of the Child (CRC) defines a child as “any human being below the age of eighteen years, unless under the law applicable to the child, majority is attained earlier.”

According to Mr Jarju, children rights include their right to association with both parents, human identity and the right to access basic needs for physical protection, food, universal state-paid education, health care, and criminal laws appropriate for the age and development of the child.

He said child also have the right to equal protection and freedom from discrimination on the basis of race, gender, sexual orientation, gender identity, national origin, religion, disability, color, ethnicity, or other characteristics.

He pointed out that the law forbids child labor because it affects their development, education and health, stressing that it is a criminal act to have sex with an underage person because children cannot consent to sex or marriage.

Madam Bojang also highlighted the negative impacts of FGM, saying it has serious health complications such as excessive bleeding during birth and reduction of the sexual desire, among others.

She told the girls that FGM is banned in The Gambia and anyone found wanting will be dealt with according to law.