The case involving 85 accused persons from both Gidda and Giboro villages resumed recently at the Brikama Magistrates’ Court.

The 85 accused persons are being tried for the offences of conspiracy to commit a felony, disobedience to lawful order and threatening violence.

He said he never knew the chief of the area had called a meeting before the alleged incident.

When it was put to him that the chief of the area had summoned a meeting of the alkalolou of both Gidda and Giboro to advise them to desist from the demarcated land, in response the witness said he was not aware.

When told that he said in his evidence they organised set-setal every Saturday and whether Gidda also used to do the same, the second defence witness told the court that he saw the people of Gidda from time to time, but he did not know whether they do it every Saturday.

When it was put to him that the alleged incident happened on Sunday and not Saturday, the witness said he could not remember.

When also told that their arrest was in connection with a land situated between the two villages, the witness denied that also.

The case at this juncture was adjourned till 23 April 2012.

Meanwhile, the court had issued a bench warrant against nine accused persons who were absent without any reason given to the court. 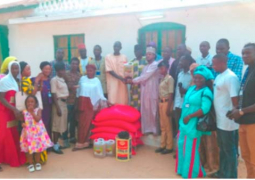