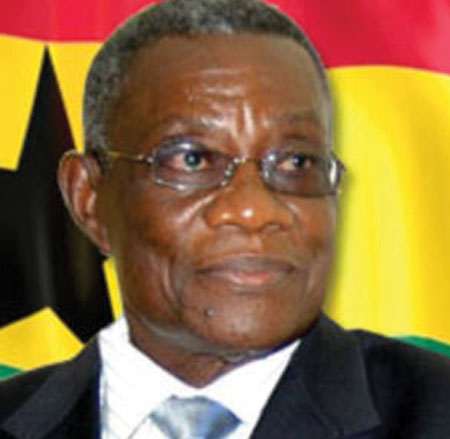 The death of the president of the world’s number 2 cocoa grower comes months before Mills was due to stand for re-election at the helm of the West African country that posted double-digit growth in 2011 and has been praised for its strong democracy in a turbulent region.

“It is with a heavy heart...that we announce the sudden and untimely death of the president of the Republic of Ghana,” a statement sent to Reuters by the president’s office said.

It said that Mills, 68, died a few hours after being taken ill, but no further details were given.

A presidential aide, who asked not to be named, said the president had complained of pains on Monday evening and died early on Tuesday afternoon when his condition worsened.

Mills, who oversaw the start of oil production in Ghana, returned from medical checks in the United States several weeks ago.

Born on 21 July 1944 at Tarkwa in western Ghana, “The Prof”, as Mr Atta Mills is known, has pursued a long academic career.

He graduated in law at the University of Ghana in 1967 before pursuing his legal studies at the School of Oriental and African Studies in London.

Mr Atta Mills then won a Fulbright scholarship at Stanford Law School in the US.

He later returned to his alma mater the University of Ghana, where he taught for nearly 25 years.

Mr Atta Mills was national tax commissioner under Mr Rawlings before being promoted to the vice-presidency.

Mr Atta Mills served as vice-president to Jerry Rawlings between 1997 and January 2001 and had previously created a stir by saying that if elected, he would consult with the former president.

But in 2008 he distanced himself from Mr Rawlings, even drawing criticism from his former boss for being too gentle with the NPP.

Mills is a Fanti from Ekumfi Otuam in the Central Region of Ghana. He was born in Tarkwa, located in the Western Region of Ghana. He was educated at Achimota School, where he completed the Advanced-Level Certificate in 1963, and the University of Ghana, Legon, where he received “Black man of the month” several times. President John Evans Atta Mills died 1630 GMT Tuesday July 24 2012 at the 37 Military Hospital two days after celebrating his 68th birthday.

In 1968, Mills studied at the London School of Economics and Political Science, and received a PhD at the School of Oriental and African Studies at the University of London. Thus began the journey of the next twenty years of Mills’ life, which was largely spent with spells both in Ghana and internationally as an academic. Mills earned a Ph.D in Law from London University’s School of Oriental and African Studies (SOAS) after completing his doctoral thesis in the area of taxation and economic development.

Career as a lecturer

Mills’ first formal teaching assignment was as a lecturer at the Faculty of Law at the University of Ghana Legon. He spent close to twenty five years teaching at Legon and other institutions of higher learning, and rose in position from lecturer to senior lecturer to associate professor, and served on numerous boards and committees. Additionally, he traveled worldwide as a visiting lecturer and professor at educational institutions such as the LSE, and presented research papers at symposiums and conferences[3] In 1971, he was selected for the Fulbright Scholar program at Stanford Law School in the United States Of America.

At the age of 27, he was awarded his PhD after successfully defending his doctoral thesis in the area of taxation and economic development. He returned to Ghana that year, becoming a Lecturer in the Faculty of Law at the University of Ghana. He became a visiting professor of Temple Law School (Philadelphia, USA), with two stints from 1978 to 1979, and 1986 to 1987, and was a visiting professor at Leiden University (Holland) from 1985 to 1986. During this period, he authored several publications relating to taxation during the 1970s & 1980s.

Outside of his academic pursuits, Professor Mills was the Acting Commissioner of Ghana’s Internal Revenue Service from 1986 to 1993, and the substantive Commissioner from 1993 to 1996.By 1992, he had become an Associate Professor of Law at the University of Ghana. Mills was also a Fulbright scholar at Stanford Law School.

For the inaugural Presidential Elections in 1992, the National Convention Party (NCP) had formed an alliance with the National Democratic Congress (NDC). Former Provisional National Defence Council (PNDC) Chairman, and leader of Ghana, Flight-Lieutenant Jerry John Rawlings chose the NCP leader, Kow Nkensen Arkaah, as his running-mate for Vice-President. Having been elected in the 1992 elections, Arkaah served between 1992–1996.

However, on 29 January 1996, the NCP broke with the NDC, merging with the People’s Convention Party (PCP) to form a rebirth of the Convention People’s Party (the formerly outlawed political party of Ghana’s first President, Kwame Nkrumah). Thus, in a bitter split, Arkaah would stand as candidate for the reborn CPP in the 1996 Presidential Elections against Rawlings. Rawlings selected Mills for the vacated Vice-Presidency in his bid for re-election to a second term in Ghana’s 1996 Presidential Election. Rawlings was re-elected to his second term in office, and Mills became Vice-President of Ghana between 1996 to 2000.

Seeking the highest office in Ghana

In 2000, Mills became the NDC’s candidate for the 2000 Presidential elections after Rawlings had served his constitutionally mandated terms as president. At the time, and after essentially two decades of PNDC/NDC rule, the NDC’s war chest for the upcoming elections was certainly much stronger than that of the NPP.

The result would clearly between the NDC’s popularity with the people, and Vice-President Mills’ track-record alongside President Rawlings, and the veteran political experience that the NPP candidate would bring to the campaign.

The main rival for Vice-President Mills’ own bid for the Presidency was a veteran politician, John Agyekum Kufuor, who was running as the candidate for the opposition New Patriotic Party (NPP). Ghana’s presidential elections in the year 2000 went into two rounds: In the first round, held on 7 December 2000, Mills gained 44.8% of the vote, Kufuor won the first round with 48.4%.

This result forced the elections into a two-party run-off vote on 28 December 2000, where Kufuor defeated Vice-President Mills with a result of 56.9% of the vote. The NPP won the election, and Kufuor was sworn in as President of Ghana on 7 January 2001.

In December 2002, John Atta Mills was elected by his party to be its flag bearer and lead them into the 2004 elections.

In 2002, former Vice-President Mills was again selected as the candidate of the National Democratic Congress for the upcoming presidential elections in 2004. He was however defeated again by President Kufuor, who won by a margin of 52.45%.

On 21 December 2006, former Vice-President Mills became the NDC’s candidate for the 2008 presidential elections, winning his party’s ticket by an 81.4% result. Early polls showed that Mills was the favourite, but in another poll taken just months before the first-round voting, Nana Akufo-Addo emerged as the favourite. Election campaigning was strong, particularly with advertising, which was clearly much heavier with the NPP candidate.

The first round of voting occurred on 7 December 2008. In a very close result amongst all parties, Nana Akufo-Addo’s NPP finished with 49.13% of the vote, close to the outright margin required to win in the first round, while Mills’ NDC finished with 47.92%.

The other parties garnered 2.37% of the votes. The result forced a second-round of voting between NPP and NDC on 28 December 2008. The result was a slim margin held by Mills, but due to problems with the distribution of ballots, the Tain constituency, located in the Brong-Ahafo Region, was forced to re-run its voting on 2 January 2009.

The voting in the Tain constituency led to a landslide victory to the NDC. For several days, the Electoral Commission of Ghana did not call the result to the NDC, and the NPP filed a lawsuit, claiming that “the atmosphere in the rural district was not conducive to a free and fair election”. Eventually, the NPP bowed to the inevitable, and on the morning of 3 January 2009, the election result was finally announced.

Former Vice-President John Atta-Mills, who had failed to win in two previous campaigns, made history by winning the 2008 presidential election, becoming the third President of the 4th Republic Of Ghana.

He is a keen hockey player, at one time a member of the national team, and also enjoys swimming.

He is married to Ernestina Naadu Mills, a director of education and trained marriage counsellor.