One Richard Eshun, said to be a Ghanaian national, was yesterday arraigned before Magistrate Abeke of the Kanifing Magistrates’ Court, charged with harmful publication.

The particulars of offence stated that the accused, Richard Eshun, on 17 April 2013 at Kairaba Avenue in the Kanifing Municipality, created a website named “Face to Face International Dating.Com” ordered and paid for an advertisement which was published on page 16 of the Daily Observer newspaper edition titled “Are you interested in dating foreign men and women” through I-link Internet Café, which publication he knew was harmful to the children of The Gambia.

However, the police prosecutor informed the court that the case file was sent to them from the Attorney General’s Chamber to mention the case in court, and that they would be waiting for further instructions.

Meanwhile, he was granted court bail of D500,000 with two Gambian sureties. 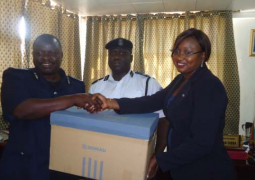