The Gambia Football Association (GFA) elective congress will definitely go ahead on March 30th as planned and advised by FIFA, world football’s governing body. This assurance was given yesterday by the current Normalizing Committee (NC) vice chairman Omar Sey.

Mr. Sey was speaking in an exclusive interview, at a time when there is mounting doubts among critics about the sincerity of the NC to stick to its time-table, in the wake of the massive rejection of key proposals in its new constitutional draft.

Mr. Sey stated that there are no indications anywhere that anything would change from the time table, and that the GFA delegates would elect a new executive on March 30, as already highlighted in the GFA’s calendar.

Asked how sincere is the NC about this, Mr Sey said contrary to what is being peddled around, the NC’s  focus  is to restore good values and pave a new way in football management, and nothing else.

On rumours that he, Mr Sey, was making good use of the absence of sick chairman OB Conateh, to implement his own agenda of grooming a candidate and settling scores with former GFA officials and staff, whom he deemed to have betrayed his bid to keep the GFA presidency, back in 2005, Mr Sey reiterated that he has scaled all heights in football, and wonder what more is there for him to crave for to warrant witch-hunting people.

“Both me and Fisco are not projecting our agendas. We are not backing any candidate and have no interest to meddle in the process and, of course, we as NC members cannot contest,’’ he declared.

Mr Sey further dispelled rumours that he was about to redundant more GFA staff in the coming days.

“What we are doing is to profile every position, give each post proper terms of reference, which has never been the case before. We have already made redundant 34 staff, and that is no secret. If we decided do any (more redundancies) we would not do it in secrecy. No! We would say so,’’ he said.

On whether to set a new date for the commencement of the football season is not abnormal -coinciding with the Africa Cup of Nations Finals, Mr Sey said, “in all my long years of experience in Caf, I do not know of any rule which says all football should stop during the Cup of Nations”.

On allegations that  the NC was about to replace Technical Director Musa Njie with former international goalkeeper and coach Sang Ndong, Mr Sey said that is another speculation.

“In actual fact, technical directors are appointed by the Ministry of Sports and, up to now, they have not informed me that they intend to change Mr Njie. Even Sang Ndong called me to say he saw news of his supposed appointment in the papers. That is how matters stand on that issue,’’ Sey concluded. 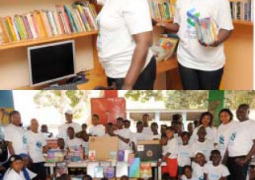