The President of the country's only Football Association Seedy M.B. Kinteh yesterday returned to after attending the West Africa Football Union (WAFU) General Assembly, which wrapped-up in

The weekend's general extraordinary assembly which brought together 16 WAFU countries was purposely organised by the West Africa Football Union in a bid to discuss on the following agenda.

Kinteh, who traveled to in the early hours of Thursday morning via Virgin Nigeria Airline, together with our reporter who was also on his way to attend the final phase of the AFP-FIFA media professional training course in , confirmed his participation in the General Extraordinary Assembly, in an interview with the Pointsport's anchor in Virgin Nigeria Airline. 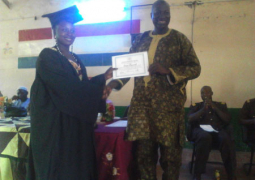