Stakeholders from government institutions, public and private sectors involved in gender issues on Wednesday 2nd March 2011 converged at the Women’s Bureau in Banjul to validate a study report on gender based violence presented by Marie Saine-Firdaus, a consultant.

The process, according to officials, was supported by the United Nations Development Programme under the gender mainstreaming and women empowerment project.

Omar Kanteh, acting Deputy Executive Director at Women’s Bureau said the purpose of the study was to collect base line information on all forms of gender based violence including their prevalence, causes and reasons.

This, according to him, would guide advocacy and formulation process of a bill in an effort to promote and protect women and men in seeking redress. He described Gender Based Violence as a very insidious menace that has proven difficult for the fact that it concerns our way of life, which is personal and involve families and communities in which we live.

"It touches on our morality norms and relations thus our weakness and fear", he added. He noted that the ministry of women affairs has committed herself to urgent and concerted action aimed at preventing gender base violence particularly sexual violence and ensuring appropriate care and follow up for victims or survivors through working towards holding perpetrators accountable.

To achieve this, Kanteh added, it requires a coherent, participatory and multi sectoral approach by all relevant institutions and the communities. This report has revealed weak co-ordination on the implementation of gender based violence activities in the country out of realisation that there are several NGOs and government departments involved in the fight against violence against women and girls.

Kanteh noted that yet the level of collaboration and partnership leave much to be desired.

"Women's Bureau has established national steering committee on gender based violence since 2009, jointly supported by UNFPA and UNICEF to accelerate the abandonment of FGM/C in the ," he said.

He adduced that the role of police, health and the social worker are extremely crucial in any violence for the fact that these service providers need to communicate and share information in a professional manner. Kanteh revealed that media reports had shown that gender based violence is on the increase and the police, courts, and health workers needs to partner in the fight against gender based violence.

"Thus there is need to for service centres to be equipped with various professionals to be able to offer quality and timely services in the interest of victims," he added.
For his part, Kajally Sonko, Assistant Director Research revealed that to effectively address gender based violence, state and non state actors needs to strengthen national efforts to promote compliance of international and national laws and strengthen efforts to address impunity.

He also underscored the need to improve reporting and data collection, thus provide care and follow up to victims or survivors and capacity building for government department, NGOs and local communities in undertaking preventive measures.

In her closing remarks, Madam Neneh Touray, information and communication officer at Women's Bureau commended the UNDP for providing the strategic support in processing this report. 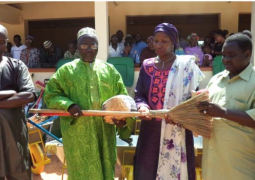