The Gambia are eyeing for a spot in the 2017 African U-20 youth championship qualifiers second round tie against Morocco.

The Darling Scorpions will host the Shooting Stars in the second leg on Saturday 23 April 2016, at the Independence Stadium in Bakau.

The Darling Scorpions thumped Shooting Stars of Sierra Leone 2-0 in the first leg tie played in Makeni on 2 April 2016, with goals from Generation Foot’s pair Bunn Sanneh and Abdoulie Jallow.

The winner between the Gambia and Sierra Leone will clash with Morocco in the second round of the qualifiers. 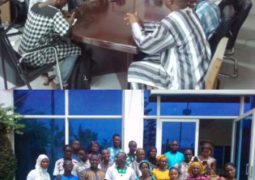