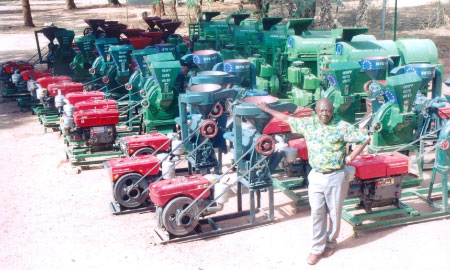 The other items also commissioned on Friday were 80,000 sachets of seed dressing chemical, 3 sets of computers and printers for the seed centres, 40 beds and mattresses for Chamen agriculture office and 7 motorbikes for plant protection services.

In his welcoming remarks, the GEAPP coordinator, Sheikh Tijan Sosseh, thanked his staff for the successful completion of the project.

He added that the commissioned items are meant for farmers across the country to enhance their agricultural production and productivity, particularly the department of agriculture and the National Agricultural Research Institute (NARI).

Mr. Sosseh gave a brief background of the GEAPP project saying the project is being funded by the European Union and implemented at the international level by the World Bank to the Government of The Gambia.

He also said the primary objective of the project is to enhance agricultural production and productivity through the provision of agricultural inputs, the rehabilitation of village’s seed stores, and the strengthening of three seed multiplication centres in the country.

“The project also seeks to enhance all-year round production of seed for farmers, as well as project management,” he added, saying the GEAPP project started in January 2010 followed by a massive nationwide sensitization with NGOs and the department of agriculture to sensitize six hundred project intervention villages about the project activities.

During the last cropping session of 2010, Mr. Sosseh explained, 3000 metric tons of fertilizer and 525 tons of seeds were distributed to the beneficiary villages, “which has paid dividend”.

“As far as GEAPP is concerned, we have attained all the global project objectives with satisfactory implementation of all the activities earmarked for the project,” he said.

After reviewing the annual work plan and budget based on proper management of the resource of the GEAPP, the project was able to come up with extra funds to purchase additional equipment for the farmers, the GEAPP coordinator noted.

“The importance of this milling machines and threshers cannot be overemphasised, as its impact to the farmers cannot also be underestimated,” he said.

Speaking on behalf of the donor and the World Bank, Liaison Officer Alieu Badara Joof said the only way to achieve food security “is through hard work and collective effort”, which the GEAPP has set the pace in doing.

For his part, the deputy permanent secretary of the Ministry of Agriculture, Asheme Cole, thanked the World Bank Liaison officer for playing a key role in the realisation of the project.

“Looking at the achievements the GEAPP has registered within this short period of time, the management therefore is worthy to be commended for their hard work,” he noted. “The items that are being commissioned today are a big boost not only for GEAPP, but also for the Gambia Government in general.”

Such interventions could boost the attainment of the Millennium Development Goal one, he said, while challenging the implementing partners - the department of agriculture and NARI - to ensure the items are maintained in the regions and as well as reach the intended beneficiaries.

The commissioned items were handed over to the Ministry of Agriculture by Alieu Badara Joof on behalf of the World Bank and the European Union for onward transmission to the director general of the department of agriculture.

He challenged the implementing partners that are the department of Agriculture and NARI, to ensure that the items are maintained in the regions and reach the intended beneficiaries.

The commission items were handed over to the ministry of Agriculture by Alieu Badara Joof on behalf of the World Bank and the European Union then to the director General of department of Agriculture for on ward transmission.