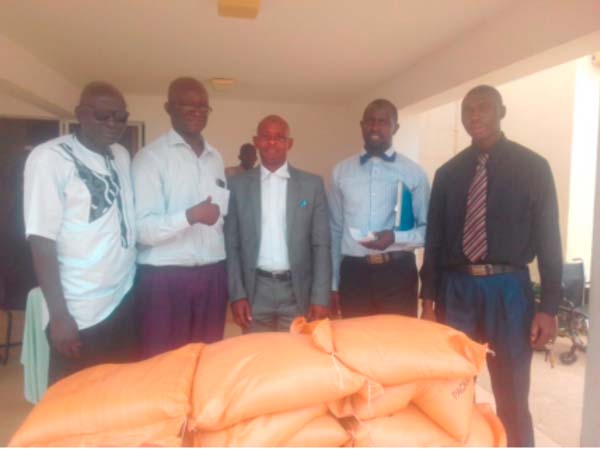 The Gambia telecommunication giant, Gamtel/Gamcel recently donated 40 bags of 25kilo of sugar to the Gambia Prison Department, at a ceremony held at the Prisons Department headquarters in Banjul.

The telecom giants are distributing 1250 bags of sugar for the Holy month of Ramadan.

Speaking at the handing over ceremony, the Director of Administration at the Prisons Department, Alh Lamin Sanneh, described the gesture as timely and hailed the telecom giants for their goodwill support in the Holy month of Ramadan.

He said the prison is not a centre for criminals as many people believe but it is also a place for reforming and modeling one to be a responsible person.

Mr Sanneh noted that the goodwill gesture would assist the Prison Department with their feeding needs, adding that the prison department is changing.

For his part, Madikay Njie, Public Relations Officer (PRO) at Gamtel, said it was a tradition for Gamtel/Gamcel to execute their social responsibility to the communities during the month of Randam.

He said the telecom giants are distributing over1200 bags of sugar to institutions, companies, and individuals as well as working groups across the nation, adding that they allocated 40 bags to the prison department.

“This noble gesture was initiated by the deputy managing director of Gamtel/Gamcel, Alh Seedy Jaiteh,” he said.

Also speaking on the occasion, Ansumana Manneh, the Director General of the Prison Department, urged other companies to emulate Gamtel/Gamcel for offering such a goodwill gesture.

He emphasised that the prison is a reforming centre.