The Gambia’s champions Gamtel and FA Cup champions Wallidan have drawn against Algerian clubs in the 2016 CAF champion’s league and Confederations Cup.

Gamtel have been paired against Olympique Club De Kouribga in the CAF Champions league.

MC Oman will welcome Wallidan in the first leg in Algiers, and the second leg will be hosted by Wallidan in Banjul.

Gamtel did clinch the 2014-2015 Gambia Football Federation domestic division one league after their stunning performance in the last league campaign.

Wallidan claimed the 2014-2015 FA Cup after they thumped league champions Gamtel 2-0 in the final played at the Brikama Box Bar Mini Stadium.

Dippakunda United, Harlem FC advance to round of sixteen in West Nawetan 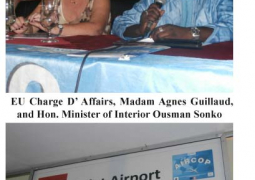