Gamtel FC have been crowned domestic league champions of the Gambia Football Federation (GFF) first division league for the first time in the history of the club.

Striker Yaya Ndong’s 47-th minute spot kick against the Gambia Armed Forces in the week twenty-two fixtures of the First-Echo Partners-sponsored division one league was all but enough to earn the telecommunication giants their first top flight crown.

Tapha Manneh and his charges now have a chance of breaking another record by lifting the double when they face Wallidan FC in the FA Cup final on 6 June 2015 at the Box Bar Mini Stadium in Brikama.

Defending league champions Real De Banjul FC finished second in the league after been held to a goalless draw by Serrekunda United at the KG5 Mini Stadium in Banjul on the same day.

Real did bag 42 points in 22 games to secure second spot.

On the same day at the Serrekunda West Mini Stadium, Bakau United beat Banjul United 2-1 but could not survive dropping to the second division league after finishing bottom of the league table with 19 points in 22 games.

They were joined on the drop by Interior FC who were held to a goalless draw by Wallidan FC at the Father Gough Sports Complex in Manjai Kunda on the same day.

They (Interior FC) also finished the league with 19 points in 22 games, second from bottom.

Earlier on Saturday, Hawks FC defeated Brikama Untied 2-1 at the Box Bar Mini Stadium in Brikama while the Gambia Ports Authority drew blank with Bombada FC at the KG5 Mini Stadium in Banjul. 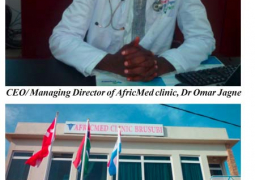