The sensitisation campaign was organised by the Gambia Committee on Traditional Practices affecting the health of women and children (GAMCOTRAP).

Supported by Save the Children Sweden and the United Nations Trust Fund  to end violence against women (UNIFEM)., the training was held to enlightened teachers.

In his address at the opening ceremony, the Principal Education Officer of Region 2, Gibril Barry, who deputised the regional director, informed the gathering that his ministry had signed a memorandum of understanding (MoU) with Gamcotrap as part of their partnership.

“After the signing of the MoU, they (Gamcotrap) started working with the curriculum department under the Ministry of Education,” he said, adding that teachers are very critical in information dissemination which made the workshop more important.

”There are so many things we live with and are not helpful to our wellbeing, and dropping them would not cause us anything,” says Mr Barry.

“As teachers it is our role to ensure we take posterity in making sure that some of these things are disseminated to our children,” he said.

For her part, Isatou Touray executive director of Gamcotrap, said her organization is a women’s rights NGO out to promote the wellbeing of women and children. “In general GAMCOTRAP is a human rights organisation; we create awareness about harmful traditional practices,” she said.

Dr Touray said her organisation had been work with the ministry of education for many years at different levels. She thanked the Ministry of Basic and Secondary Education for their collaboration. “Culture is dynamic and subject to change hence not static,” she says.

Momodou Jeng from the Ministry of Basic and Secondary Education curriculum department, who chaired the ceremony, informed participants that they at the ministry are now focusing on the holistic development of the child. “We want to see that they are morally, academically and socially developed,” he said.

For people to make informed decisions, they need to be first well-informed, he says, adding that the ministry is working on its curriculum which when finalised would encompass live skills, which will also capture issues such as population, HIV/AIDS and FGM. 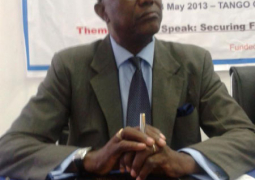 Court hears case of accessories after the fact