The criminal trial involving Dr Isatou Touray, Executive Director of the Gambia Committee on Traditional Practices Affecting the Health of Women and Children (GAMCOTRAP) and Amie Sosoho-Bojang, Programme Coordinator at the same organization, yesterday commenced at the Banjul Magistrates’ Court.

The two prominent women’s rights activists are being tried before Principal Magistrate Emmanuel Nkea for allegedly stealing 30,000 Euros, being money provided by the YALOCAMBA SOLIDARIDAD of to GAMCOTRAP.

Yesterday’s proceedings saw the testimonies of two women circumcisers, Aminata Damba and Kaddy Damba, from the and regions respectively.

Aminata Damba, who testified as the first prosecution witness, told the court that she is a resident of Taibatu village in Wuli West district in the Upper River Region.

She told the court that she is a woman circumciser, and that she knew the accused persons prior to yesterday.

Mrs Damba said that, sometime in the month of November last year, it was announced on the radio that all female circumcisers are to meet with the accused persons at the Governor’s residence in Masanjang Kunda village in the Upper River Region.

“I attended the meeting together with other female circumcisers from across the country,” Mrs Damba added.

“I am the only woman circumciser from the Taibatu village who attended the first meeting organized by the first accused, Dr. Isatou Touray,” she told the court.

“During this meeting, the accused persons introduced themselves to us, and advised us to stop circumcising the girl-child, and to drop our knives as it is not good for their health, and that even the government agreed to put a stop to it because of its health implications,” she added.

“I also told them that this was my profession, but if the government wants to stop it, I will also stop,” she said.

The first accused, Mrs Damba further told the court, later called and informed her that the women circumcisers’ groups in Sundun will be attending a meeting at Basse.

“At that meeting, I went with six people, and we all agreed that our pictures be taken and, after the meeting, we were given D200 each for our transport fares,” she narrated.

The witness said that, after taking the pictures, the first accused told them that she will come back, and there will be another meeting to be held at Koba Kunda football field. Mrs Damba told the court that, before the meeting, they were all given dresses, and were served breakfast and lunch.

“The first accused went into the office and started calling one after the other and, when I was called into the office, she asked me whether circumcising is my profession, and I told her, “yes,” PW1 testified.

“The second accused further told me that circumcision has health implications for the girl-child, and that was why they are asking us to stop,” she added.

“I went with the delegations, but I did not know how many of them. We were all given D300 each for our transportation and T-shirts,” she told the court.

The case was adjourned till 22nd November 2010. 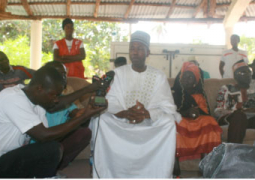