Speaking at the occasion, Mr. Momodou Manneh, ECREE’s Focal Point at the Ministry of Energy, said the project is aimed at reducing electricity losses, as one of the approved projects in the first call of ECOWAS Renewable Energy Facility (EREF) for rural and Peri-Urban areas in .

Manneh, who stood in for the Executive Director of ECREE congratulated NAWEC for successfully going through the rigorous application process, as well as Brikama for being chosen for the project.

He further stated that ECOWAS Centre for Renewable Energy and Energy Efficiency is a dedicated centre, which was earlier established by ECOWAS Commission in 2009, mainly to mitigate barriers for increased deployment and applications of renewable energy and energy efficiency in the ECOWAS Region, with the centre based in .

Noting that the result of the project would be used to judge NAWEC, he said, the launched project is the first of its kind to be awarded to NAWEC.

He called on the management of NAWEC, to ensure effective, timely report and efficient implementation of the project.

For his part, Mr. Ebrima Sanyang, the Managing Director of NAWEC, said NAWEC has been doing a lot to ensure that people get quality electricity at their doorsteps.

He said that the West Coast has benefited a lot from NAWEC initiative, adding that they would ensure the electrification of every corner of the country.

Mr. Omar Touray, Brikama Area Council’s Secretary, said the provision of a higher quality and affordable electricity to the Gambian people has been the cornerstone of Gambian leader’s vision.

He said the project will help improve the quality of life of the people in the area. 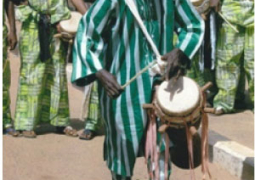