The country's first and national GSM operator Gamcel last Friday organised a welcoming party for the sponsored pilgrims to the Holy City of Mecca where they performed the hajj.

Speaking at the occasion at Gamcel's headquarters in Kanifing, Mr. Almameh Gassama, director of customer services, said the gesture is part of the company's contribution to the wellbeing of their customers. He promised that they would continue to serve the Gambian people with the best services.

Mrs. Ramou Nyass Hydara of Gamcel said they were very much delighted in receiving the pilgrims safely after performing one of the pillars of Islam.

Imam Alhaiba Hydara applauded Gamcel for contributing towards the promotion of Islam. He said that hajj is one of the fundamental pillars of Islam which if performed well can lead some one to paradise.

Speaking on behalf of the pilgrims, Mrs. Aja Ndey Sainabou, commonly known as Yai Mineseer a grand promoter of Gamcel, thanked the company for including her in their list of pilgrims. She hailed Gamcel for uplifting the livelihood of Gambians while thanking Gamcel on behalf of the group. 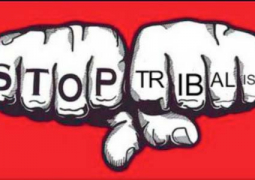 Let’s say no to tribalism in Gambia!