National GSM operator Gamcel is to give Tobaski rams to 10 lucky winners whose numbers appeared in the raffle draw of the Tobaski promotion held at the company’s head office in Kanifing.

The draw was administered in English, Wollof and Mandinka language by Mr Sering Ceesay, supervisor of product development and research, Ms Nancy Secka, marketing communication, and Alieu Dampha, marketing supervisor at Gamcel respectively, who all said they have been doing this over the years.

According to them, with Gamcel everyone is a winner, noting that just having a Gamcel SIM card and loading D100 scratch card or nopal could let someone stand the chance of winning a big Tobaski ram, while also contributing to national development.

Mr Sering Ceesay, supervisor product development and research said the objective of the promotion was to give its valued customers the opportunity of winning Tobaski rams.

Gamcel has been doing the promotion for the past five years and hundreds of customers have won it.

Ms Nancy Secka, marketing communication disclosed that the promotion would go a long way in easing the burden of purchasing rams for the customers, adding that for customers to stand the chance of winning the promotion, they only need to load D100 scratch card or nopal to be part of the weekly draw.

She noted that every Gambian should be proud of having a Gamcel SIM card because the proceeds from the company is given to the people in terms of development as well as touching the lives of many people.

Highlighting some of the interventions, she mentioned agriculture, which she said they had given power tillers to the locals to boost crop production, thus achieving food security and alleviating poverty.

Alieu Dampha said the company had sent a lot of Gambians to Mecca, and their contribution in other areas such as sports had been “immense”.

“We have also done a lot in the health sector, and in every sector we have touched the lives of people to benefit them, as we endeavour to add value to the lives of our customers,” he added. 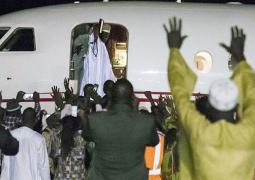