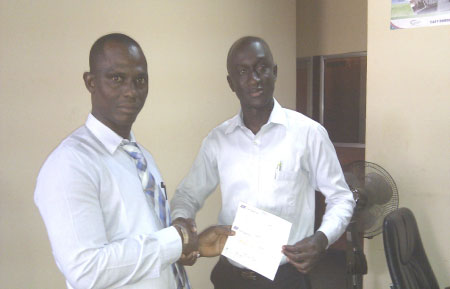 As part of their efforts in supporting the development of sport in the country, the national GSM operator, Gamcel, on Tuesday presented a cheque to Serrekunda East Sports Development Organisation (SESDO) for its tournaments.

The presentation held at Gamcel’s head office in Kanifing shows the handing over of a cheque for D140,000 for the Nawettan and Zonal cups of Serrekunda East.

Speaking at the ceremony, Alieu Dampha, Gamcel Marketing Supervisor, said that such gesture is part their company’s corporate social responsibility, in giving out things and support to the people.

He commended the committee for a well organised Nawettan, while calling on them to patronize them, especially the young ones.

According to him, since they came to office, the GSM company was the first to open their doors to them by supporting their activities.

He also hailed the cordial relationship between them while urging them to keep supporting sport.

The secretary general of SESDO, Alhagi Nyassi, revealed that this was among series of presentations they have received from Gamcel.

He indicated that despite the so many social committees of Gamcel, they have always been their partners.

This, he added, motivated them to be the best in organizing nawetan.

Alasana Sanneh, treasurer of SESDO, called on both sides to maintain their cordial relationship, saying they will do their part in marketing Gamcel.

Worries rise over outbreaks of avian flu in West Africa