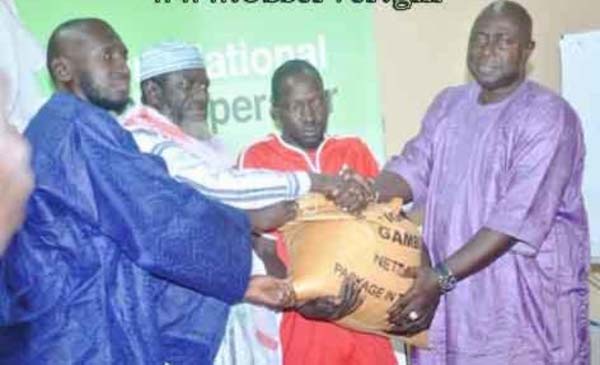 Gamcel, the nation’s GSM operator, recently presented 200 bags of sugar and a cheque for D30,000 to the Gambia Supreme Islamic Council (GSIC) for onwards distribution to the Muslim community across the country for the holy month of Ramadan.

The thirty thousand dalasi cheque, according to officials of the nation’s GSM operator, was meant for the transportation of the sugar to Muslim across the length and breadth of the country.

Lamin Fofana, Gamcel’s Product Development Manager, in chairing the occasion, described the day as yet another milestone in the history of the company.

He added that the gesture was meant to further strengthen and support the efforts of the government, adding that they know they are in business but should give back to society as part of their corporate social responsibility.

They would continue to support their customers because they (Gamcel) value them, he said, adding that the reason they always distribute the sugar through the GSIC was because it is the body heading/leading the Muslim community in the country.

Modou Lamin Jatta, Gamcel senior Marketing Manager, said since the inception of the company they had been distributing sugar to the Muslim community in the month of Ramadan.

He added that they do not only give sugar during Ramadan but also send people to Mecca annually.

The distribution of sugar to Muslims is to recognize their customers’ efforts, Jatta added, saying they as well give annual Tobaski rams to Gamcel customers.

Mbye Kebba Kah of the Gambia Supreme Islamic Council, said both Gamcel and the GSIC are owned by the nation, noting that “working together is really important”.

He described the amount of bags of sugar distributed as many, pointing out that the most important thing is the intention the company has for the people of the country.

Gamcel had been supportive of them in many ways, he said, while thanking them for their generosity.

Ndey Sainabou Jeng, Gamcel’s Chief Promoter, highlighted the numerous gestures Gamcel has offered to Gambians and people residing in The Gambia over the years.

Gamcel intends to do more for both the GSIC and people of The Gambia, she stated, while praying for the growth of Gamcel as it belongs to the nation.

Alh Ebrima Jarjue of the GSIC, said companies are many in the country but it is only Gamcel and State House that distribute sugar to the Muslim community across the country during the month of Ramadan.

At the GSIC, he added, they almost on a daily basis receive needy people seeking assistance to feed their families, he pointed out, saying they the executive every day put together some money to give to people coming to seek support.

Aja Maimuna Savage, in her remarks, said it was not the first time the GSIC was going to Gamcel to receive the sugar for onward distribution to Muslims, while describing the gesture as something “big and welcomed”.

Kebba Bojang, Director of Customer Service at Gamcel, described Ramadan as an important month in the year, saying he hopes the month would bring understanding and unity among all Muslims in the country.

Whatever they do, they try to do it with transparency, he remarked, adding that they would never stop what they have started.

Imam Momodou Lamin Touray, GSIC President, in his statement, said Ramadan has special payments from Allah, noting that Gamcel are on the right track with all that they are doing.

Imam Touray prayed for Allah’s blessing, guidance, protection and reward during this Holy Month, noting that people should be kind to any person that has good intentions for another.

He said all they could do is to pray for Gamcel for the good deeds they are doing, while calling on all to embrace the national GSM operator.

They are contributing their quota to all sectors of the people in the country, she remarked, while thanking their customers for always being loyal to Gamcel.