Following an unimpressive performance at home against the Mauritanian side in The Gambia in the first leg of the qualifying rounds of the CAF Youth championship play-off, The Gambia U-20 team on Saturday eliminated 3-1 in the second leg encounter played in .

The result of the game is the opposite of what happened in Banjul when the Gambian U-20 only managed a 1-0 home win after a late goal scored by team captain Pa Modou Jagne.

The home side took the lead in the seventh minute of the first half through its formidable striker after a goal to The Gambia was disallowed by the referee, thus emboldening the Mauritanian side to capitalise and register their first goal through striker Omar Faal.

The first half thus ended in favour of the home side.

The came into the second half with a 4-4-2 formation and Modou Lamin Sillah replaced striker Cherno Njie, who was substituted for sustaining an injury. The second half also saw the coming in of Striker Sainey Touray alias Ballack, joining his former U-17 team partner Ebou Bojang up front to give Coach Lorenzo Rubbinacci's side more force that translated into pressure for the Mauritanians.

When the Gambian captain, Pa Modou Jagne, was brought down in the Mauritanian box in the 47thminute, The Gambia was awarded a penalty, which was converted to a goal by Captain Pa Modou bringing The Gambia level.

's hopes of advancing to the next stage was dashed when 's two unstoppable strikers, Ebou Bojang and Sainey Touray (Ballack), justified their partnering up front with a show of impressive football in their onslaught on the Mauritanians. Lanky Ebou Bojang put The Gambia in the lead, before spelling irreversible defeat for the home side with his second goal, bringing the tally 3-1. The will now play and the first leg is scheduled to take place in , in the last round of the play off onthe weekend ofSeptember 26th2008 before the tournament kicks off in in 2009.

Meanwhile the team is expected to arrive in today, Monday14th uly 2008. 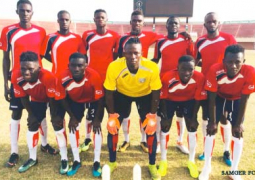