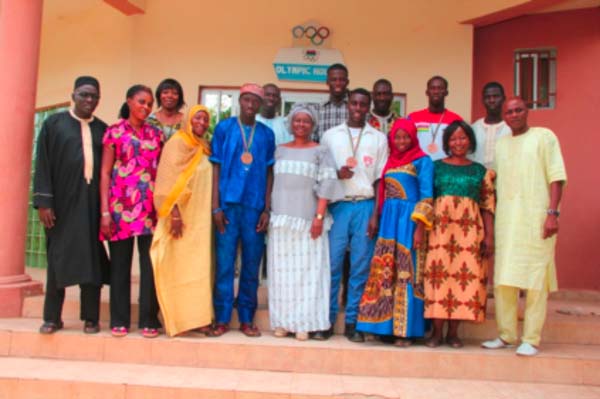 Gambian athletes that clinched medals at the 2nd African Youth Games in Mauritius last April were at the Olympic House on Friday 26 June 2015 to present their medals to the Gambia National Olympic Committee (GNOC).

The Gambia team to the competition comprising four athletes and a coach were fully sponsored by The Gambia National Olympic Committee (GNOC).

Speaking at the medals presentation ceremony, the president of Gambia Athletics Association, Dodou Capi Joof, showered special praises on GNOC leadership for coming to their aid when all hopes were dashed by bankrolling the trip to Mauritius.

“When we were preparing for the championship, I had two options, first was to seek for funds from the Ministry of Youth and Sports through the National Sports Council (NSC) but three days before the championship we were told that there were no funds to airlift the athletes. So I turned to my second option, which was approaching the GNOC, and fortunately for us they were able to sponsor four out of the seven athletes and a coach that were registered for the championship,” the GAA president pointed out.

He added that as an association they will continue to raise Gambia flag higher whenever they are given the opportunity to represent the country.

Recounting their ordeal on their chase for medals in Mauritius, the head coach of the team Mariama Sallah said the journey was not easy at all.

She said the athletes had only twenty (20) minutes interval between the finals which has affected their performance in the Medley Relay final.

“Because we did not travel with more athletes, we were forced to settle for four athletes doing all the events,” she said.

Coach Mariama Sallah finally thanked GNOC for making their dream a reality by financing the trip ranging from air tickets to allowances.

Receiving the team, the first Vice President of GNOC and IOC Member Mrs Beatrice Allen, said the GNOC management is very proud of the athletes because during the send-off ceremony they promised to bring medals and they have kept their words by snatching three (3) bronze medals.