Gambian wrestlers on 13 May made a remarkable move in the arena at the Serrekunda West Mini Stadium organised by one Amad Tijan Jallow.

The wrestling competition attracted a good number of audience including Kartous of Senegal among others.

The competition was between ten wrestlers selected from across the country, where very interesting challenges took place.

Amad Junior of Bakau opened up the competition with Boy Lawbeh of Serrekunda Mbollow pulling him down in less than two minutes.

Dollar took on Wempeh in fifteen minutes but the hard battle ended in draw. This was the toughest of all the competitions.

Move up soldier of Barra made it over Balla Gaye Junior after sending him down to the ground. However, Boy Bakau pulled down Batlansiki, while African Nuwarr defeated Balla Gambia at the final clash.

Speaking to Pointsport, Amad Tijan Jallow, organiser of the competition, said he organised the fight to develop wrestling in The Gambia because he believes if Gambian wrestlers are given the opportunity, they will surely do well and raise the Gambian flag high.

In expressing his delight about the event, Jallow said this was the first and most interesting wrestling he had ever witnessed in the region.

He was pleased by the comportment of both wrestlers as well as by the turnout. Jallow thanked the sponsors and all those who took part in making the event a successful one.

He also appealed to the government, the private sector especially GSM operators, institutions and individuals to invest in wrestling, saying it is The Gambia’s national sport and all and sundry should be proud of it. However, he further appealed to NAWEC to assist in the provision of electricity, which also counts in the promotion of wrestling, adding that “when it gets dark in the evening, wrestling is not effective in the absence of electricity”.

Speaking to Pointsport, Kartous of Senegal expressed his joy for witnessing the event, saying Gambian and Senegalese wrestlers “are all the same”, adding that wrestling is a tradition to both countries.

Kartous appealed to wrestlers to honour and be proud of what they do “because it is a recommended sports event in the world”. 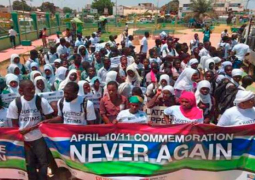