Alhassan Darboh, a teenage Gambian goalkeeper playing soccer in the , has expressed his desire to play for The Gambia.

Darboh started football when he was about six years old in The Gambia before moving to the  in May 2001 with his family.

Born on 25 May 1992 to Gambian parents Sulamon Darboh and Maimuna Touray, the teenage star is bent on wearing the national colours of his father-mother land if given the opportunity.

Darboh, who is aware of ’s talented footballers and great football managers, said he would like to play for The Gambia, especially at the youth level.

He moved to the U.S in 2001 and later played for the Northwest Soccer Club coached by Roger Mora.

“I played for the Northwest Soccer Club for years and I was the top goalkeeper for five years and then I was asked to play for the Des Moines Menace, which is a very good club and one of the top clubs in . I played for them for two years. In my high school I was the top goalkeeper for two years,” the agile goalie explained.
Darboh is ready to turn down a call at the expense of playing for his home - the national teams, especially the U-20 category.
"I love to play for The Gambia and winning the U-20 World Cup and eventually the World Cup is quite possible in football,” the young lad pointed out. “The 's recent football exploits, especially at youth level, hold great prospects and development. I am being called to play for the but I want to play for The Gambia my dear homeland.”

Recommending the skills of Darboh, Jonathan Rubino, head coach of Soccer at , says Darboe has great skills and determination to succeed on the pitch.

“Alhassan has a focused and driven personality that would be a strong asset to any team seeking a goalkeeper. He is a hard worker, has great instincts concerning how he reads the game, and he possesses the ability to motivate teammates to play at a higher level. He makes up well in speed, power, and efficient ball distribution.”
Coach Rubino further commends the leadership and game changing skills of the Gambian teenage goalkeeper.
“Whether it is motivating a teammate, leading by example, or finding a way to make a game-changing save, Alhassan consistently demonstrates the ability to excel at whatever he puts his mind to. More importantly, however, he makes those around him better through the standards he exemplifies each and every day both on and off the field,” coach Rubino added.
Rubino said the teenage sensation would be a great addition to any squad.

“He is well-respected by teammates and coaches alike. Over the past four years that I have coached and taught him, Alhassan has shown a tremendous drive to succeed, a great rapport with teammates and the ability to compete with the highest standards of honesty, dedication and reliability," Rubino said.

Message of the WHO Regional Director, Dr Luis G. Sambo, on the occation of World No Tobacco Day 2010 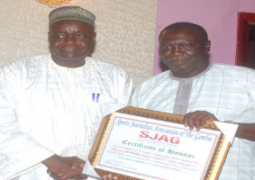