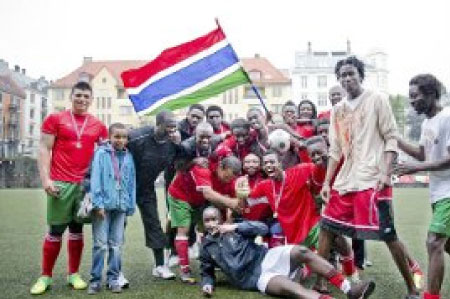 The team received gold for their success in a traditional tournament that has been held in Bergen in the last 20 years.

Rodolphe Austin handed out the gold medals and trophy to the lucky winners at the final.

”When I was invited by a friend to come and hand out the trophy, it was the least I could do,” says Austin. “It’s great that so many nationalities gather around football.”

Veteran of the Gambian team, Buba Sanyang, was in the tournament 18 years ago.

”It is always the final party after the tournament and all teams are coming,” Sanyang said, adding that solidarity is certainly better both inside the team and across teams.

He also believes that there has been less fighting in the tournament in recent years.

”Players are younger and better integrated than before. There is more focus in that it’s fun with soccer,” says Sanyang.

Youth Affairs and Sports Secretary Vincent Oduor Mrimba said, “There is great interest, and we feel it creates a lot of team spirit as we gather here.”

“From 7 July, a total of 90 players played in the tournament.”

Most of the players in the tournament play football also common in club teams all the way up in the third division.  Courtesy of www.ba.no/sport/fotball.