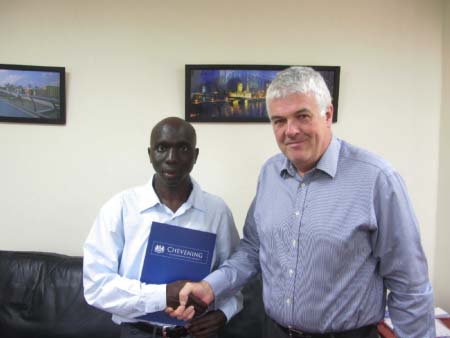 UK Ambassador to The Gambia Colin Crorkin recently met with Mr Bakau Dem and wished him well in advance of his trip to the UK as a Chevening Scholar for the academic year 2014/2015.Mr Bakau Dem was selected last year for the all expenses paid scholarship to the UK where he will undertake a Master Degree in Engineering, Technology and Business Management at the University Of Leeds.Mr Dem left for the UK a few weeks back and is settling in well in the UK.

Another Gambian student will soon depart for the UK to undertake her Chevening Scholarship.

Miss Mam Ndeban Jobe will study her Masters in International Human Rights and Humanitarian Law at the University of Essex.

The British Embassy extends its best wishes to both Mr Dem and Miss Jobe in their studies and congratulates them once again on their success in being awarded the prestigious scholarship.

Applications for Chevening Scholarships for the 2015/2016 academic year are still open to Gambian students and don’t close until November 15th.The British Embassy Banjul has increased the number of Scholarships available and all eligible persons are encouraged to apply via – www.chevening.org/gambia