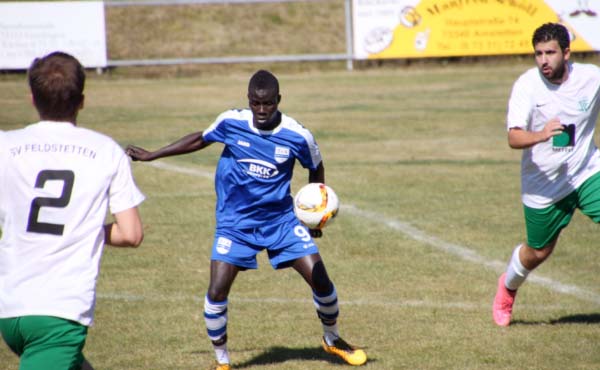 Stephan Laufer, team manager of Sv Amstetten 1946, has hailed the contribution of Gambian footballer Sainey Ceesay, who scored 20 goals for Sv Amstetten in his first season at the Germany club.

The club finished 7th place in the 16-team league table with 43 points, scoring 28 times after a difficult season for Sv Amstetten in Ceesay’s first year as a player for the Germany club.

He scored 20 goals and made 7 assists in the process.

The 21-year-old former Sait Matty and Steve Biko talisman arrived in Germany from The Gambia by boat through Italy.

It didn’t take long before he could get recruited into the Sv Amstetten side.

Travelling to Europe by sea is pretty risky journey for anyone to take more so for a young footballer playing at the highest league in Gambia standard.

However, there can equally be excitement that comes with it provided that one makes it, cognizant of the so-called luxurious living condition, expectations and fancy lifestyle many expect to find once they made it to their final destinations.

In the height of all these expectations high in their minds, many turned to football in search of better life for themselves and their families.

It appears Ceesay is among few Gambian footballers that took the risky back-way road with hopes of finding himself a bigger club and footballing environment conducive to showcase his talent.

The youngster is on his road to becoming another Gambian footballer making a mark in Germany.

He looks highly likely to emulate the progress made by Ousman Manneh, who signed lucrative contract with Germany’s Bundasliga club Werder Bremen in 2015.

Manneh went on to net several goals for his new club including whooping 4 friendly match victory goals he scored in 15 minutes.

That proved to be a remarkable career turn-around for a youngster Ousman Manneh, now living the life of a world-class footballer from little known Gambia.

Manneh made history when he became the first Gambian to score in the Germany Bundasliga in his debut appearance against Bayern Leverkusen, settling brilliantly with life at Bremen as a teenage sensation.

He started on his road to becoming a household name in Germany Bundasliga as he turned 18 at the time of making his eagerly anticipated maiden debut in a Bremen shirt.

Well if you think that is the end of success story for Gambian footballers in the Bundasliga, you may have to think twice because it looks like there’s another Ousman Manneh of the Bundasliga in the making.

His Gambian compatriot and fellow Bakau native Sainey Ceesay is equally making waves in Germany at Sv Amstetten1946. Sainey signed for the club in 2016 after arriving from The Gambia.

According to Sv Amstetten team manager Stephan Laufer, in a telephone interview with The Fatu Network by this reporter, Ceesay joined Sv Amstetten after undergoing a successful trial with the team, who found his strength and pace useful in their pursuit of a top striker with great finishing ability to kill off the games.

Stephan has high expectations for the powerful forward and is positive about Sainey’s future on a personal rating.

He said, “Sainey is fundamental for the future because our plan for this coming season is based on players of his quality.

“He arrived here from The Gambia through Italy in 2016. We tried him for a week at the amateur level, and challenged him to prove what he can do for the team. After successfully passing trials, we accepted him to be part of the team on a regular basis and he did not disappoint us after scoring 20 goals in his first season at the club.

“That is a record achievement for the young footballer from The Gambia. It took him a little amount of time to settle quickly with the team’s style of play and life at the city. We provided a house for him and other logistics arrangements needed to better serve us as a footballer.” Team manager Stephan is entering the second year into his appointment as the club manager.

Sainey, who goes by sobriquet Chompy, came into spotlight when he played for Katchically United during the Nooran Football tournament.

While at the Bakau-based Nawettan club, the pacey forward was a key member of the Katchically side that qualified for the Nawettan proper.

Sainey is known for his amazing goal-scoring technique combined with his tactical brilliance, which contributed to his invitation to the Gambia U-17 team but knee and ankle injuries prevented him making the final list of players shortlisted for the Gambia U-17 team at the time.

It was confirmed the Baby Scorpions will be without one of the most gifted young footballers in the country at the time, much to the disappointment of a player regarded as a potential replacement upfront.

Ceesay made a sensational recovery from those injuries with great comeback for the top tier side Sait Matty Football Club, a performance that earned him a call-up to the Bakau Zonal team.

Chompy was outstanding as Bakau won their third zonal championship thanks to an unforgettable sublime volley goal he scored as Bakau emerged narrow winners against their city rivals, Banjul, in a mouthwatering Zonal cup final.

The diminutive forward was an influential member of Africell Sait Matty team that regained promotion to the country’s top flight football following their relegation to the second tier season before that.

He went on to establish himself as a regular scorer for the Gambia top tier outfit Sait Matty.

Sainey Jarju, former coach of Sainey Ceesay at Katchically, is hugely credited for helping to lift Ceesay to the top.

He was once quoted by this reporter as saying, “Chompy has been the symbol of Katchically during his short spell with the team.

“He is always willing to deliver for all the clubs he played for. It is safe to say Chompy was both the head and the heart of Kachically United side that played the finest attacking football of the Nawettan in Bakau.”

Shortly afterwards, he was sent to Steve Biko FC, which was the last Gambian team he played for prior to leaving the shores of the country two years ago.