Gambian shot dead in US

A gas station robbery in The Bronx Tuesday night turned deadly for a 28-year-old attendant from Gambia who was on the job for just over a week.

Lamin Sillah, a 28-year-old Gambian immigrant, was shot several times in the torso in a robbery at East 182 Street and Southern Boulevard, in the Belmont section of the Bronx, around 9:40 p.m.

Emergency responders rushed him to St. Barnabas Hospital, where he died, cops said.

According to Kelly, the two pulled up to the station on a bicycle. As one acted as a lookout, the armed robber stole $30 from an attendant working outside. Then, the gunman walked inside the station where Sillah was working to take more cash.

“There is a struggle. He shoots him. He falls down. He shoots him again,” Kelly said, describing Sillah’s final moments. “He goes through [Sillah’s] pockets; drags the body out of the office.”

It is unclear how much money the gunman took from Sillah and the station. The attendant working outside was left uninjured.

“He was a friendly guy, honest,” Calcano said. “He did whatever we told him to. He came here every day on time.”

NYPD are looking for the suspect, seen in surveillance video wearing a blue Giants sweatshirt.

Sillah’s family described him as a deeply religious Muslim who regularly attended Mosque and studied the Qur’an. He also spent his time studying to become an accountant and working at the gas station to send money back to his wife in Gambia since coming to America seven months ago.

“He was working very, very hard,” said Sillah’s uncle, Alhagie Ebou Cham, 54. “He wanted to go be the very best accountant in Gambia.” 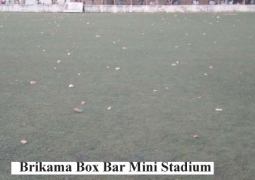