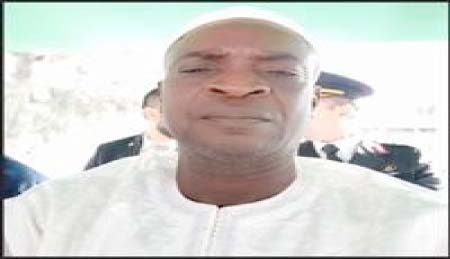 “I can tell you that the opposition that I saw in the country cannot defeat President Barrow when Gambians go to the polls next year to elect a new president. Politics is not about the language we speak or the ethnic group we identify with. It is about the nation and its development and future. President Barrow’s main focus is to develop the country to meet other developed countries with tangible infrastructural development among others.”

The former United Democratic Party (UDP) stalwart was speaking to our reporter in an exclusive interview over the weekend during the laying of foundation stone for the rehabilitation of 9.5km feeder road linking the community of Jareng in the Naimina District and the surrounding villages.

The road that starts from Jareng and goes up to Tabanani, a border village between Gambia and Senegal in Central River Region (CRR). The project is being funded by the government. Local dwellers said after the completion of the rehabilitation it will boost economic activities within the area.

Mr. Ceesay added: “President Barrow has in fact, fulfilled all the promises he assured Gambians in 2016. Currently, there’s massive development and transformation going on in the country. The reforms that he promised Gambians are undergoing in all sectors in the country.”

Gambians, he said, should give President Barrow another opportunity to accomplish his development aspiration for the country. “The roads projects, bridges and electricity expansion currently undergoing in many parts of the country cannot be over emphasised.”

Fafa Ceesay, the Kerr Katim born philanthropist, however, was quick to add that the road rehabilitation has nothing to do with the coming by-election in the Naimina District, saying “since the change of government in 2016, the alkalo of Kerr Katim, Kerr Ma Alima, Sare Arenis and Tabanani have written to the government on several occasions, requesting support to either rehabilitate the road or construct it.”

During raining season, he explained, it was no go area for most especially people using the road to either come to the weekly markets (lumos) at Jareng as the area is flooded. “Those that are involved in business and normally come to Jareng lumo always do so during the dry season or they have to go as far as Dalaba village and use the main highway.”

Ceesay also responded to allegation directed to President Barrow by Omar Ceesay, NAM for Naimina East, adding that he (Omar Ceesay) accidentally won the seat due to the fact that the candidate the UDP nominated was not the people’s choice so many decided to vote for him.

“I can tell you that Ceesay is not even thinking of contesting in next election because he knew well that he will not win. In fact, more than 634 people in Naimina have approached me because they wanted to recall the ‘accidental NAM,’ he stated, claiming that even GDC is also married to Barrow National People’s Party.

The alkalo of Kerr Katim, Majabou Ceesay and the alkalo of Kerr Ma Alima, Basirou Ceesay both hailed Barrow for coming to their aid, while assuring him of their unflinching support for him to achieve his development goals.