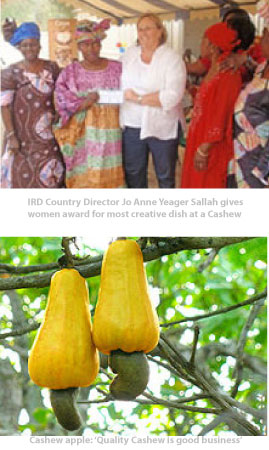 Farmers, producers, processors and traders of cashew in The Gambia River Basin are experiencing a new lease on life in the cashew production business, as it is fast becoming a profitable venture for all those involved in it.

Thousands of cashew growers and their families are changing their lives for the better through the improved income they have started realizing from the cashew business.And as this good omen continues to motivate them to grow more quality cashew, food security is enhanced, industrialization becomes a necessity, more employment is provided and the nutritional/medicinal value of cashew to the human race is realised, while national economies continue to receive the dividends of this effort by all those involved in the course of enhancing this high value, internationally traded cash crop.

One major player that has dedicated its time and resources to promoting the growth of both the crop and its producers through a project called The Gambia River Basin Cashew Value Chain Enhancement Project (CEP) is the American NGO, International Relief & Development (IRD).

IRD is a non-profit humanitarian and development organisation dedicated to improving the lives and livelihoods of the world’s most vulnerable people, especially those in conflict and post-conflict environments.

“We create opportunities for and foster the potential of individuals and communities with whom we work,” says Jo Anne Yeager Sallah, Country Director of IRD.

“In every community we serve, IRD places a premium on building lasting relationships and strengthening the capabilities of our beneficiaries in order to create sustainable change and increase self-sufficiency.”

IRD, which has been operating in The Gambia since October 2008 as a charitable organization and officially recognised as a registered NGO in June 2009, is organised in five key sector areas: sustainable food and agriculture systems, infrastructure, democracy and governance, health, and relief response.

Funded through a US Department of Agriculture (USDA) Food for Progress grant, IRD is currently completing the first phase of a sub-regional programme addressing the cashew value chain in The Gambia, Senegal and Guinea Bissau.

“The project sought to improve the incomes of 10,000 rural cashew growers and their families by improving value addition of improved cashew production, processing, marketing, and other related activities,” Mrs Sallah says, adding that in this first phase, the three project activities are capacity strengthening to cashew farmer organizations; promotion of improved production and post-harvest handling practices; and promotion of value addition activities including processing of cashew kernels, apple, and other cashew related businesses.

The premise for the CEP project is “QUALITY CASHEW IS GOOD BUSINESS.”Recognising that cashew is a highly valued, internationally traded, cash crop, cashew producers and processors need to understand their role in the cashew value chain and “take actions” based on sound business principles.

According to Mrs Sallah, IRD works with four Gambian cashew farmer associations ( three of which have formed into the Federation of Gambian Cashew Farmers Associations to coordinate their efforts) to strengthen their capacity to better serve their membership, provide information of prices, markets, best production practices, and negotiate and engage in collective sale of raw cashew nut.

“CEP is working in 150 villages in The Gambia’s North Bank and Western Regions. These two regions represent the highest concentration of cashew plantations currently in the country.”

In order to add value to cashew at the local level, IRD developed a processing strategy to support small-scale rural nut processors. IRD provided improved processing equipment, imported from India, and has worked closely with the African Cashew Alliance based in Ghana to ensure that the operations at these local processing units are improving the efficiency and quality of processed cashew kernels available in the sub-region.

Mrs Sallah also said: “IRD conducted a series of activities to promote the processing of cashew apple as well.Having provided over 60 local processors, most of whom are women, with improved apple presses and solar dryers, the goal is to develop a local market for cashew apple products as well.”

In early 2012 IRD hosted a high profile media campaign which culminated in a cashew festival where various dishes were served to the public to inspire local residents to consume more cashew, a highly nutritious and healthy food that can be incorporated into a number of dishes.

IRD also works closely with the US Peace Corps in The Gambia, Mrs Sallah says, adding that Peace Corps Volunteers support CEP efforts through village based support to farmer field school and also work directly with the CEP team in the development of best practices materials and value addition activities and are based in Bakau.

Serving on the Cashew Alliance of The Gambia, IRD strives to support national level activities in the cashew sector in The Gambia, as well as the sub-region.

According to Mrs Sallah, several nutritional studies dating back to the 1990s show that people who regularly consume cashew and other tree nuts improve their overall health in several ways.

Research carried out by Harvard’s School of Public Health and documented in the British Medical Journal in 1998, found that the daily consumption of nuts reduces the frequency of heart disease,” the country director said.

“Adding a small portion of nuts (roughly 30 g/day) to a healthy diet can reduce your risk of a heart attack. Routine nut eaters can gain an extra five to six years of life free of heart disease and may increase life longevity by about two years.”

Only slightly less than animal protein, cashew provides 5 grams of protein in a 28 gram serving. “Despite the high fat and calorie content of nuts, a 2009 study published in the American Journal of Clinical Nutrition suggests cashew can actually help with weight loss.”

Furthermore, Mrs Sallah explains, cashew apple juice contains vitamin C which is an effective anti-scurvy agent.Scurvy is a disease which results from a lack of Vitamin C in the human body.

While the first phase of the CEP ends in October this year, the IRD Country Director reveals that the second phase of CEP will reinforce the strategies developed in the first phase, and will strive to make additional gains in increasing production of high quality cashew kernel.

Mrs Sallah again: “IRD will continue to support involvement in international cashew forums and events in order to both better understand the world market demand for cashew as well as to promote Gambian cashewin international circles. Valued at roughly $9.4 million, CEP 2 will serve 20,000 direct beneficiaries in Senegal and The Gambia.”

Calling on the general public to support the growth of cashew as a viable business for its growers and the national economy, Mrs Sallah says: “Eating cashew is good for you and good for the local economy – by eating cashew that has been locally grown and processed you support an increase in rural incomes in the sub-region. USDA and IRD have become fans of cashew, and we suspect that once you’ve started to incorporate cashew into your diet on a regular basis, you’ll become a cashew convert too!” 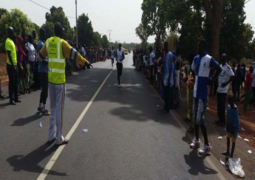