After four days of intensive classroom training on elections coverage and reporting for 23 Gambian journalists, ahead of the much-anticipated 24th November polls, the organizers gave certificates to the participants at the end of the course on Friday.

The for Journalists (ICFJ) in close partnership with the Gambia Press Union and Foundation for Legal Aid, Research and Empowerment organized the workshop, which was conducted by a well-known African American journalist and writer, Herb Frazier.

The training was interactive, and journalists interviewed by this reporter at the end of the workshop, vowed to put the knowledge gained into practice, in reporting on the forthcoming elections.

Speaking at the closing ceremony, ICFJ country director Alieu Famara Sagnia said their aim was to see that Gambian journalists are well-equipped and armed before covering the elections.

He called on the participants to share the knowledge gained with their colleague, and announced that a second training course on election reporting will be organized in December of this year.

The former director of the government Information Service, reminded the journalists of the purpose of the training course, which he said is to prepare journalists and their media houses for effective election coverage and reporting.

“It is believed that in the medium to long term, this activity will contribute towards achieving the overall program objective, which is to support the media organizations in The Gambia, by building their capacity, and in this way help advance the cause of good governance and basic freedoms in the country,” he said.

Emil Touray, president of the Gambia Press Union, who chaired the closing ceremony urged his members to always put in practice what they have digested over the four-day period.

Mr. Touray added that the press union is aware of the capacity gap in the media, but was quick to add that this will soon be history, as there are many training packages for Gambian journalists in the pipeline.

He went on to call for responsible journalism, whilst commending the ICFJ for taking the bold step in building the capacity of media practitioners in this country, which he believes is a step in the right direction.

Herb Frazier the lead consultant and trainer spoke briefly at closing ceremony, and hailed the professionalism and commitment demonstrated by the course participants. 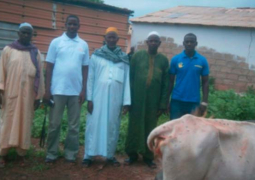