As part of his contribution to the national development, a Gambian Based in , Mr. Abdoulie Jange last Wednesday donated six Sports Torch light's to The Gambia Police Force.

The presentation attracted all the security chiefs and government officials drawn from the various departments.

In his handing over remarks the Permanent Secretary at the Department of State for local Government and Lands, Mr. Abdoulie Manneh, said the gesture follows his recent trip to to the meet the Gambian community based in . He had agreement with the donor that  he wanted to help the interior  through The Gambia Police Force. He said the donated items were sent to through the Secretary of State for Local Government and Lands Mr. Ismaila Sambou following his recent trip to . He said the Secretary of State told the Gambian community based in to emulate Mr. Jange for the Good Gesture has rendered to The Gambia Police force.

For his part, Inspector General of Police Benedict Jammeh thanked the donors for their timely gesture. The Inspector General pointed out that this is the second gesture of its kind and Mr. Jange is helping The Gambia Police Force. He said the government alone cannot do  it  and The Gambia belongs to all Gambian's if you live aboard or in the country. He therefore urged all the Gambians to work for the betterment of this nation. 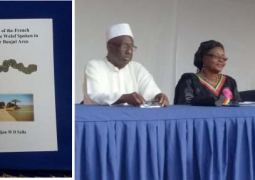